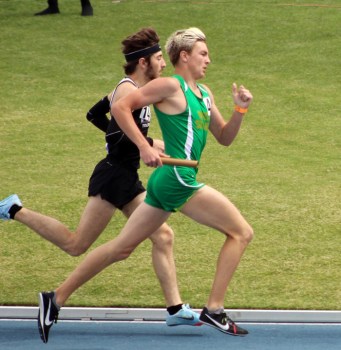 Korbin McNeill runs a relay race for the Colts. (Contributed) 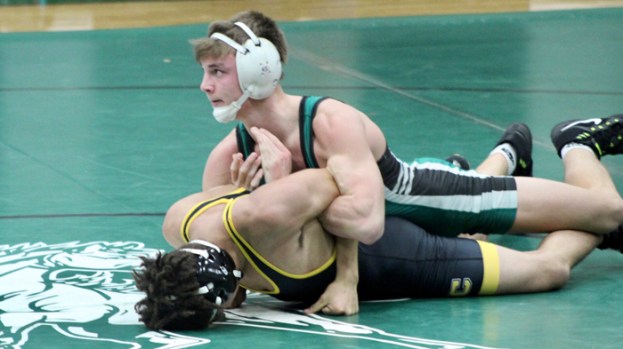 Korbin McNeill takes control of an opponent during a wrestling match. (Contributed) 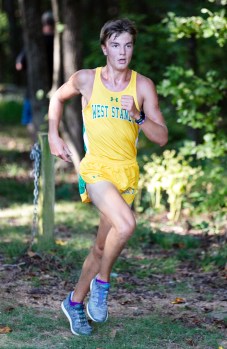 In smaller-sized 1A schools in North Carolina, student-athletes participate in multiple sports throughout an academic year.

The phenomena tends to get a little rarer as one moves up in classification, even just one higher.

However, one West Stanly student will open the spring season participating in his final sport, track, looking to graduate as one of the school’s more prolific multi-sport athletes.

Korbin McNeill, a four-year standout in cross-country, wrestling and track, will leave West Stanly this June having left a mark on the school in terms of records and accomplishments.

He finished this last wrestling season with 130 victories, third all-time at West, having qualified for the state finals his sophomore and junior seasons. He was ranked first in the state at 138 pounds before a torn meniscus kept him from competing at states this year. He finished 30-3 in the 2019-20 season.

In terms of wrestling, McNeill said finishing third all-time brings himself into the family of wrestling greats who have competed for the Colts.

“I would describe myself as a tough competitor and that also helps lead my team to want to be tough as well,” McNeill said. “Wrestling has shown me how to take responsibility for things, it has shown me discipline and self control.”

Head coach Darrel Watson said McNeill has been a natural athlete from the beginning.

“He has the heart of a champion. He is also a class act and I have enjoyed coaching him for the past six years,” Watson said, referring to his time with McNeill at West Stanly middle and high schools.

In the fall, McNeill ran cross-country and finished 21st all-time on the school’s list of the fastest times recorded.

“Cross country has helped me develop my ‘gas tank.’ Endurance is my biggest strength in any competition,” McNeill said.

The senior was also part of the 4×800-meter relay squad which set a school record last season. McNeill, Noah Almond, Arturo Zelaya and Leo Martinez won the 2A Midwest Regionals and finished fifth at the state meet.

“Korbin has been vital to the success of our cross-country and track programs,” head coach Chad Horn said. “He is as tough as they come and is strength is his heart. The desire to be the best and refusing to settle. One of the most coachable kids I have ever coached.”

McNeill said the three sports appeal to him because he is working towards individual goals while contributing to the success of a team.

“I know my coaches and teammates rely on me,” McNeill said. “I don’t have a favorite. I love them all because they have each developed me to be who I am.”

McNeill said he plans to pursue a career in criminal justice and help younger wrestlers achieve their goals.

Sports Editor Charles Curcio can be reached at charles.curcio@stanlynewspress.com, (704) 983-1361 or via Twitter (@charles_curcio).