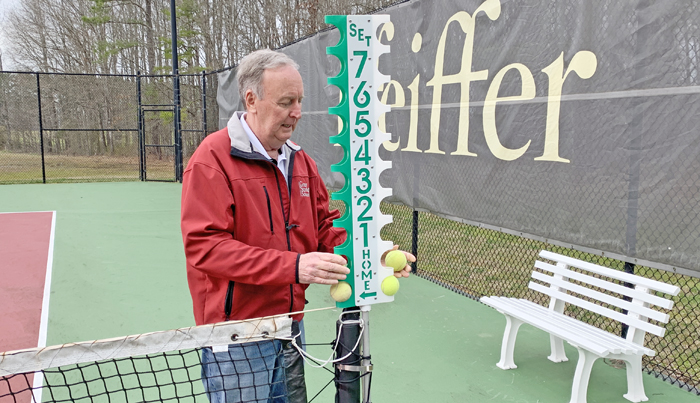 Gary Moran sets up the scorekeeping devices on the nets before a home Gray Stone match on the Pfeiffer tennis courts. (Photo by Charles Curcio)

Before the Gray Stone men’s tennis team can take the court for a match, head coach Gary Moran has many tasks to carry out.

Between opening six sleeves of brand new tennis balls to placing the scoring signs on each net, as well as setting up his lineup for the match, there is a lot to do.

The tasks are those which Moran has been doing for almost 30 years of coaching, which have led to 400 wins as a high school head coach.

His 400th win came as the head coach at Gray Stone Day as the Knights opened the season with two conference wins over North Rowan. Through the first week of the season, Moran is 403-115 overall (370-110 at Albemarle, 33-4 with Gray Stone) with a 77.9 win percentage.

Moran credits having good health as one of the reasons he has been able to coach for so long, but the wins he credited to having a number of talented players over the years.

“Kenny was a kid who didn’t hit the ball hard, but in doubles you absolutely had to hit a winner to beat him,” Moran said.

Dadlani, who moved to Albemarle from San Antonio, Texas, had several strong years with the Bulldogs, Moran said. He also mentioned David Beaver, who went on to play college tennis at Pfeiffer.

More than any individual, though, was the numerous good kids who played well and did not get to play at the next level whom Moran said he remembers.

Regarding the dual team playoffs, Moran said “The team has gotten close three or four times. There has always been that one team out there that knocked us off. But I have always had good kids…that’s the best part of it.”

Moran said being a good tennis coach is about helping kids to do more than just hit the ball back.

“A lot of the kids can hit the ball back, but a lot don’t do it in a way to learn to become good tennis players. It takes a lot of skill development most other sports don’t have,” Moran said.

Many of the kids he coached never picked up a tennis racket to play competitively until their freshman year in high school.

“It takes some patience,” Moran said.

Another difference between coaching tennis and other sports is the limited time legally a coach is allowed during a match to speak with a player.

With six singles matches often going on at the same time, Moran said it’s hard to see everything.

Much of the credit of his success, he added, has to go to Wayne Brooks, who worked with Moran for many years at Albemarle. Moran said Brooks is a good tennis instructor from whom he learned a lot, more about instruction and less about technique.

Despite having won so often, Moran said he is still as competitive as he was back when he played. That fire is one reason he has twice come back from retirement to coach, with two stints at Albemarle and his current assignment with Gray Stone.

“I used to be an athlete many years ago, and coaching is the closest way I can still compete a little bit,” Moran said.

Whether an athlete is winning or losing a match matters less to Moran than whether they are competing.

“That rubs me wrong worse than anything because I want them to really compete,” Moran said.

Competing for every point is important because of the nature of tennis, he explained.

“Time’s not going to run out; darkness is your only hope, but you have to come back the next day and finish it up.”

One difference Moran said between the athletes at Albemarle and Gray Stone he has coached was how the Knights’ players are more academically oriented.

“I’ll have kids after school who have a seminar or workshop that can’t be here to practice every day. I had some excellent students (at Albemarle) who were dedicated to education, but pretty much every afternoon…they were their for practice,” Moran said.

When he stepped in as coach, Moran said the players were eager to show him something, but like his final years at Albemarle, it’s hard to be a coach and not be on campus.

Earning 400 wins in a sport which often plays 15 to 16 matches a year makes reaching the milestone more difficult, Moran said. He added with his teams winning around 13 times a year, it made for a good winning percentage.

“Tennis is not a huge sport in some parts of the state…most of the time I’ve always had three, four or five good players,” Moran said.

The Gray Stone coach said he is not a coach who yells or uses bad language, but said he expects his players to work hard every time.

He said he appreciated every moment he has been able to coach, both health-wise and with being allowed to coach by both schools.

“We worked hard all the time,” he said. “That’s why there has been some consistency. I’ve been very fortunate and I’m aware of that.”