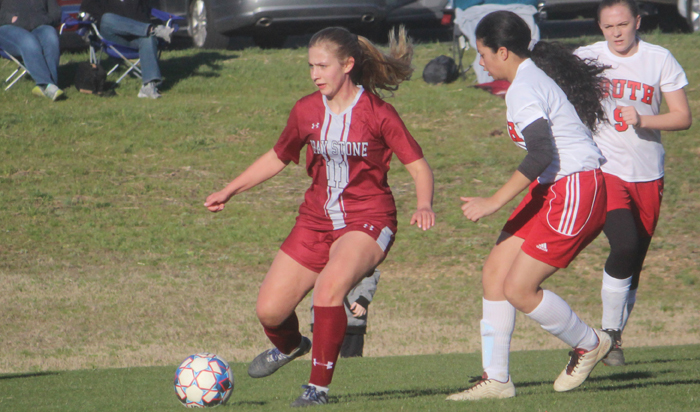 Gray Stone's Morgan Trexler looks to move the ball into the middle of the field during last season's home game with South Stanly. (File Photo)

One newcomer to the team is not completely new, having played her sophomore season with Gray Stone. Senior midfielder Christian Gentile missed all last season to injury but will return in 2020.

Among the newcomers to the team are sophomore forward Millie Roberts, whom Wolfe said should have an impact on the Knights.

Wolfe said Gray Stone will have a lot of changes on the roster, but he still expects his team to be in the conversation for the top of the conference standings.

“We will strive for a deep playoff run, and see where that might take us,” Wolfe said.

Andrew Poston takes over for South as head coach as the Bulls lost nine seniors from last season’s team which posted the best record in school history. Last season, South was 13-5 overall and 12-4 in conference play.

Poston said the seniors will be tough to replace. He added he believes the Bulls can compete at a high level against other teams on the schedule.

“Our ladies have been in the weight room and working extremely hard since October to get better and prepare for the season,” Poston said. “I believe hard work will pay off.”

Two of those seniors, Hannah Crump and Josie Hinson, are back on the team as assistant coaches on Poston’s staff. Crump will work with forwards and midfielders while Hinson, a standout in goal, will work with keepers.

Poston is a first-year coach after spending a season as a volunteer assistant at South Rowan with his best friend, Rusty Fisher.

“I am excited to be part of this community and program and I hope to be coaching for years to come,” Poston said.

Captains for this season’s squad include Keeli Crisco, Issamar Vazquez and Jacy Noble, while promising newcomers include Maddie Martin, Maddie Wright, Jocelyn Vazquez and several others, according to Poston.

“I look for this year to help cement success in future years as I hope to build a successful program at South Stanly. We have several newcomers that will come in and make an impact,” Poston said. “We looked for good kids this fall and winter from within our school, found several that will make an impact, and feel that we are building for success. They will mix with our returning players, all of which will have increased roles this year.

Head coach Heather Shaver returns for her second season as head coach after the Comets went 10-9 last season, 9-7 in the YVC, falling to Mt. Airy in the first round of the state playoffs.

North returns seven starters on a squad of 22 players overall.

“The team is starting to develop some chemistry on the field…this season we look to do well in conference play and hopefully go further in the state playoffs,” Shaver said.

North’s midfield is led by juniors Alex Childress and Andi Billingsley. Newcomer Kaidyn Waggoner, along with Maci Holshouser and Caroline Vanhoy, are nice additions to the squad, Shaver said.

The Comets’ back line is led by senior Brooklyn Frick and junior Milena Hernandez.

“Defense often gets overlooked, but our backline is a crucial component in our formation,” Shaver said.

Juniors Mallary Smith and Josie Luther are outside backs and have performed solid at the start of the season. They are joined by sophomores Abby McGraw, Josie Talbert and Madison Smith and freshman Naidelin Gonzalez.

Shaver said North is also blessed with two outstanding keepers. Darby Shaw returns from a strong freshman season and is joined by senior Nicole Lowder, whom Shaver said is a natural in the goalie position.

The Colts were 4-11-1 last season for head coach Derek Smith, with the team graduating four seniors in 2019.

Makayla Mabry will coach the Bulldogs this season after Albemarle was 1-15 last season overall.

“We have a promising group and can’t wait for the season to start and to see great progress throughout,” Mabry said.