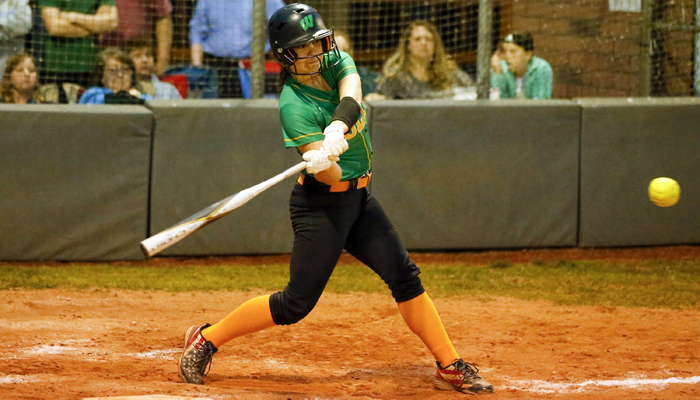 West Stanly's Kailey Furr drives a pitch over the fence in the fourth inning for a two-run home run Friday. (Photo courtesy of Earl Bradshaw)

In games Friday night, teams wrapped up their respective weekly schedules just prior to the NCHSAA’s scheduled three-week moratorium.

The Colts got another no-hitter from starting pitcher Jordan Hatch as West Stanly improved to 3-0 with a three-run home win.

Hatch went all seven innings for West Stanly, striking out 10 batters with one walk and one hit batter for the Colts.

Kailey Furr had a two-run home run for the Colts in the top of the fourth inning while Shelby Barbee added a solo home run in the sixth.

The Bulls bounced back from the loss 24 hours prior to West Stanly with a three-inning win over the Cavaliers.

South had seven extra-base hits in the game led by catcher Mattie Hinson, who had a triple, a home run and two RBIs. Holly Barrier led the Bulls with three RBIs while Emma Crump and Kaitlyn Tucker each drove in two runs.

Freshman Mattie Poulos allowed one hit and struck out one batter in three innings pitched to earn the win for the Bulls.

The Bulls hosted the Cavaliers and improved to 3-1 overall and 3-0 in Yadkin VAlley Conference play with the shutout victory.

Lawson Hicks was 1-for-3 with two RBIs, while Cam Bowers added an RBI. Crafton Mansfield, Drake Page, Logan Lilly and Camren Huneycutt all had hits for the Bulls.

West led the majority of the game until the Patriots (4-1) scored three times in the bottom of the seventh to earn the walk-off win at home over the Colts.

Connor Tucker gave West (1-2) the lead in the top of the first with a solo home run. The Colts added a run in the sixth when Colton Austin’s RBI single scored Riley Huneycutt.

Two errors and a walk led to three runs by Pinecrest in the bottom of the seventh. Colby Wallace’s RBI sacrifice fly gave the hosts the win.