Keeping a yoga community together with technology 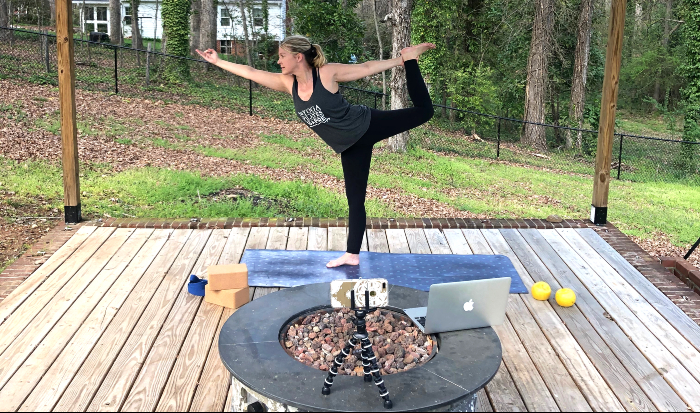 Like many local businesses which have been required by the state government to do so, Albemarle’s Yoga Pilates Barre closed its studios in March.

However, fitness fans will still be able to get drive-thru takeout, of a sort, with classes moving online.

At first, her classes were with some done with current staff as part of it for those with monthly memberships or passes.

Starting Wednesday, she went to solo instruction from home and closed the studio the next day.

“I’m getting up in the morning and still teaching the group class; it’s just me doing and teaching it at the same time,” Purser said.

Along with group classes, she used the FaceTime app on her phone to be able to do one-on-one classes with clients along with the Zoom meeting app.

Yoga classes can be done online, but she noted  pilates requires equipment which is only in the studio. She does have a pilates mat workout which can be done at home.

However, Purser said certain household items can be used in lieu of the equipment.

“People have been really cool…I could still teach them a lot of things with the mats or stuff they have at home,” Purser said.

For ballet work usually done on a bar, Purser said a chair, table or the like can be used.

“I’m trying to teach my classes without requiring too many props…you can create your own (weight) resistance,” Purser said.

Normally during classes, Purser does far less physically but has to perform all the moves for a class.

“I’m really tired right now because I’ve done a lot more…when I’m teaching, I’m not doing the whole class. I’m exhausted right now…I’m going to get in better shape because of the coronavirus,” she quipped.

“There’s always a positive to anything.”

Beyond being able to maintain her business, Purser said it’s important now to help others continue to improve their physical, mental and spiritual wellness.

“I know how much those practices helped me in my physical, spiritual and emotional life,” Purser said.

Being open to suggestions from her clients has also helped her in terms of implementing technology, along with her two teenage sons in helping with social media, she noted.

“My employees and my students have all been really helpful giving ideas and suggestions,” Purser said.

Online classes can not give the same feeling and sense of community compared to in person, but in this case Purser said social media will keep the yoga community together during these times.

She also noted the company has new discounts and other deals to allow people to continue to take classes and maintain healthy lives while being at home more.

Closing the studio generated sadness from a number of students, some of whom called those classes their refuge. Purser said the pandemic, for all of its bad parts, has made clearer to her the need for what YPB can provide.

“It reminds me I am the vessel for something bringing peace to people and give them a place to go to get away from the outside world.”

In May, Purser sent out a press release letting students know she had created a subscription services on a Patreon page  where new video classes will be added each week. Previews of the classes can be views on her YouTube page.

“This is a great way to get us through social distancing. In addition, lots of people have been telling me that they enjoy practicing at home and at times that work for them,This is something I will continue to do even after the studio reopens,” Purser said in the statement.

“Hopefully, this platform can help keep the studio open through this crisis and assist in maintaining and growing it in the future.”