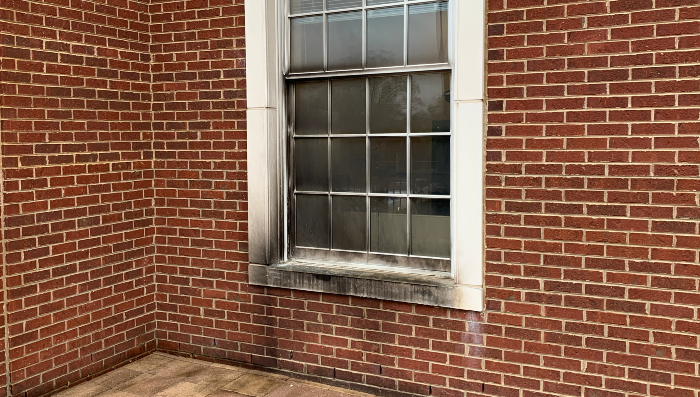 This window on the right side of the main entrance to Albemarle City Hall was damaged in an alleged arson attempt this past weekend. (Photo by Charles Curcio/staff)

Two City of Albemarle department buildings were the sites of attempted arson over the weekend, according to a city official.

In an interview Monday, Albemarle Mayor Ronnie Michael said fires were set at both Albemarle Police Department and Albemarle City Hall. Neither fire caused a great deal of damage, the mayor said.

According to Michael, at the back of the APD building a vacuum cleaner was set on fire, in turn scorching the wall.

“It didn’t do major damage; it’s something that can be sanded and painted,” Michael said.

The mayor also said a fire was attempted at City Hall but also did little damage. The window, located to the right of the main entrance, burned a screen and scorched part of the brick wall and window frame.

Michael said it was not any damage which could not be repaired, adding he believed the same person was responsible for both fires set.

Michael said no arrest had been made as of Monday morning but the APD investigation was ongoing.

Note: This story is ongoing and will have information added when it becomes available.