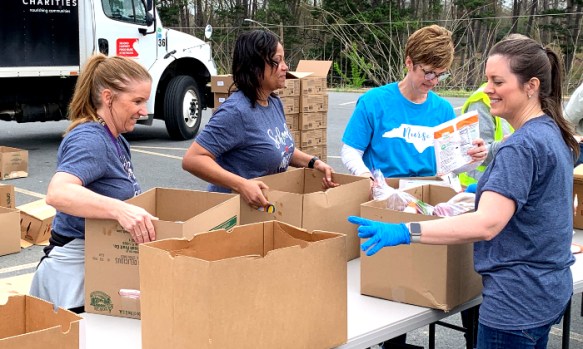 The Stanly Community Christian Ministry has been busy this week as the organization looks to help families dealing with the coronavirus situation.

Feeding Those in Need

On Friday, cars snaked their away around the Stanly County Commons for SCCM’s monthly food giveaway. A total of 300 households received two weeks of supplies placed in their cars by volunteers from the county office and school nurses from Stanly County Schools.

Stanly County Sheriff Jeff Crisco and deputies helped organize the flow of traffic around the Commons, with traffic backed up onto Second Street.

SCCM development director Jenny Clore said the organization will try to continue the monthly events, but normally they are hosted by churches. Since some may not be comfortable being out with COVID-19, she added, SCCM could not confirm whether the monthly giveaway could continue.

Tuesdays and Thursdays from 9 a.m.-1 p.m., the pantry will distribute food through a drive-thru setup at the SCCM building on First Street.

According to a Facebook post, the drive will only be able to serve 300 households or until the time limit is reached, whichever comes first.

A recent reply to a question on Facebook stated the guidelines of eligibility. Anyone below the 200 percent federal poverty line can receive food. For one individual in 2020, the level is $25,520 with an additional $8,960 for each person in the household. Income is self declared and no additional documentation is required, in part because of the exchange of paperwork, according to executive director Heather Kilde.

“We’ve seen a significant number of individuals who have been laid off due to COVID-19,” Kilde said, specifically mentioning waitresses, servers, dishwashers, hotel housekeepers and substitute teachers.

This past week, 189 households on Tuesday and 227 two days later received two-week supplies of food, according to Clore.

Kilde said families are asked to come in about once a month for supplies but added they are trying to be flexible.

An earlier post on Facebook this week was asking for donations of canned fruits and beans, canned meat, soup, ramen noodles, macaroni and cheese, dry pasta and pasta sauce.

New office hours will have the office closed Monday and Wednesday. The office will be open for food donations along with meetings by appointment for those needing financial assistance.

Kilde said the appointments are for those who are uninsured or underinsured for medicine, along with people unable to pay their rent and utilities.