Due to the coronavirus, in a time where social distancing is encouraged, friends flooded message boards and phone systems last week to pay tribute to former county commissioner Gene McIntyre. 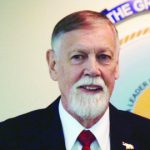 Comments surfaced from former county commissioners, students of his, good friends and other elected and appointed officials within the county.

Albemarle City Councilwoman Shirley Lowder first knew McIntyre more than 50 years ago when her oldest daughter, Lisa, was a student in his sixth-grade class at Badin Elementary.

“It wasn’t long after Gene became a teacher that he added coaching to his career,” Lowder said. “He completed any task that was assigned to him, willing and able. It took no time for the school administration to find out that Gene would try his best to do whatever they would ask him to do.”

McIntyre was a multi-sport coach and later a principal.

Roger Prince, who played tight end three years at Carson-Newman, has fond memories of McIntyre from when he played for him in Badin.

“He was such a great coach. We had such a great team, well-oiled,” Prince said of the seventh- and eighth-grade basketball team. He believes it lost only one game under McIntyre.

But it’s football for which Prince remembers him the most, as well as the impact McIntyre had on local youth.

Prince said he was “hanging out with the wrong kids, getting in trouble.”

“He pulled me to the side and told me, ‘You don’t need to be hanging with those guys. You need to be your own man.’ To the black kids in Badin, he was a father figure to a lot of the kids,” Prince said. “He touched a lot of lives. Every life that he touched, you won’t find any of those kids that grew up in that time to say anything bad about him.”

Prince said he passed down that influence to his son, R.J., who is now on the practice squad for the NFL’s Baltimore Ravens.

“The things Gene taught me, that’s the things I taught R.J.,” Prince said.

The character traits McIntyre brought to him led to his crossover in the voting booth.

“I’m a Democrat, but I vote for the person. He’s a Republican, but I voted for him because of his character,” Prince said.

Though many people knew him for his career in education and coaching, his most public side was that of county commissioner.

Former commissioners and fellow Republicans Scott Efird, Tony Dennis and others admitted that they did not always agree on viewpoints, but they did find a way to reach an understanding.

Peter Asciutto, another Republican and former commissioner, called McIntyre “a dedicated statesman that worked hard for the betterment of Stanly County.”

In late 2013, McIntyre attempted to take that statesmanship status to the next level as he ran for state senate to replace longtime senator Bill Purcell.

While on a Rowan County trip to meet possible voters, McIntyre was involved in a serious car accident. Though he lost the senate seat to Gene McLaurin, McIntyre recovered and continued to serve Stanly publicly through 2018.

He was appointed to many boards, received the Order of the Long Leaf Pine award for his public service and could be seen with his wife Sue as she carried on a love for training service dogs.

McIntyre was one of the five county commissioners who hired Andy Lucas as county manager in 2008.

“Gene provided me with a good deal of counsel and guidance through the years that has definitely made me a better manager and person,” Lucas wrote in an email. “Gene was a very thoughtful and dedicated county commissioner. Gene was passionate about his family, our community, public schools and held true to his conservative values. Gene would always carefully consider each issue before the board, especially those that impacted the lives of our citizens.”

When asked what he thought McIntyre would be remembered for, Lucas spoke to a few examples.

“I believe Gene was proud to have negotiated a settlement to the Alcoa issue that brought direct financial benefit to Stanly County,” Lucas said. “Gene was also very generous towards and one of the largest contributors to the veterans of Stanly County through the local Veterans Relief Fund. Lastly, I would say Gene’s legacy is one of upholding the conservative values of his community.”