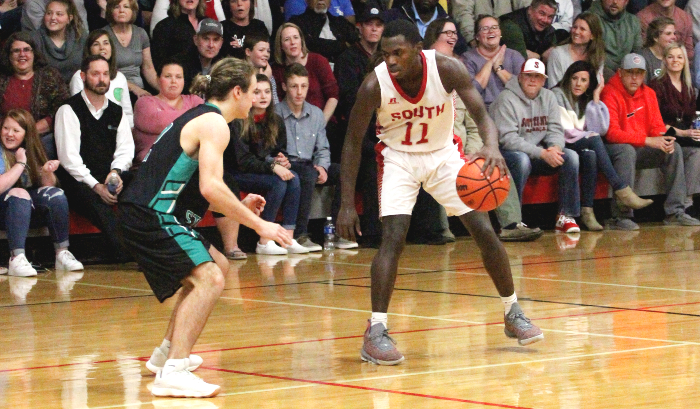 Having had some more time to reflect on the most recent high school basketball season, the one thing I remember the most was having a number of 1,000-point scorers.

Some years you have several like the 2019-20 season, but others in recent memory did not have one at all.

Basketball fans saw some great basketball this season, with three out of five teams winning 14 or more games. We also nearly had four teams in double figures with wins, with Albemarle finishing with nine wins.

This year’s All Stanly News & Press men’s basketball team came from my putting together stats, achievements and observations of my own. We will have a first and second team chosen by position, with several receiving honorable mention.

Coach of the Year – Sean Whitley, South Stanly. Whitley’s leadership along with the talented backcourt of the Bulls made South a tough team for many to match up with this season.

The Bulls were competitive against teams much taller, which is among the hardest things for any team to overcome.

Player of the Year – This was a tough one for sure. For me, four players could have earned this distinction.

Between Albemarle’s M.J. Raye, South’s Jaquez Cooke and Justin Gaddy and West’s Austin Medlin, I’m not sure anyone would want to guard them one-on-one. All of them were good off the dribble and put up big numbers on offense.

I’m going to go with Jaquez Cooke for several reasons. He nearly averaged a double-double in points and led his team in three statistical categories. He drove the offense and was so quick on defense.

Following are our selections for the All-Stanly News & Press basketball team.

Notice, if you will, the number of sophomores on this year’s selections. I believe for the next two years the level of basketball in Stanly will rise even further for some of the younger teams. North Stanly had seven sophomores this season who played significant minutes, three of whom are on the All-SNAP teams.

I also decided on the first team to put three guards on it because it was so hard for me to choose either Gaddy or Medlin solely for the first team since both played shooting guard.

G – Jaquez Cooke (Sr., South Stanly, 15 ppg, 5.6 rpg, 8.8 apg): Cooke has been the kind of athlete in multiple sports who draws all eyes to him, primarily because you never know when something special might happen.

Not even known for his long-distance shooting, I remember last season’s buzzer beater at North Stanly. He was a big-time player many times for the Bulls.

This season, he and backcourt teammate Justin Gaddy were one of the strongest duos on the same team. Teams would have to play box-and-one or even a form of triangle-and-two just to try and stop them.

Cooke was All-Yadkin Valley Conference and the YVC Player of the Year.

G – Justin Gaddy (Sr., South Stanly, 18.5 ppg, 1.2 rpg, 4.5 apg) – Gaddy developed his game over the most recent offseason to include more offense driving to the basket, and his worked paid off. He earned All-YVC honors this season and led South in points per game.

He scored his 1,000th point midway through the season in a road game at Anson County and was named the Rocky River Conference Player of the Year.

It will be interesting to see what lies ahead for Medlin in his final season with the Colts next year.

Kelly’s ability to hit the long-distance shot tended to stretch defenses this season. When Medlin was double-teamed (which happened a lot), Kelly knocked down shots and helped lead the Colts to 16 wins).

C – Dyson Bell (Soph., North Stanly, 13 ppg, 10 rpg): It’s always tough for me to put underclassmen on the All-SNAP team because they have to do so much normally to stand out from the older players.

However, every standard has an exception.

The son of an accomplished Pfeiffer player, Bell was the only player in the county to average a double-double for the season in two stat categories. He also averaged three blocks per game as well.

Until you see M.J. Raye play.

The Bulldog guard can simply put the ball in the net on the drive. If his outside game becomes more consistent, he will not only challenge Bryson Childress’ county scoring record but could potentially put his name high on the all-time list in the state over the next two seasons.

Poole got so much experience last season starting as a freshman for the Comets with that highly-successful squad, and his play showed it this season.

His play along with his fellow sophomores has to give Comets fans hope in the next two season for great things.

F – Ali Currie (Soph., Albemarle, 13 ppg, 3 apg, 2 spg): I felt Currie this season gave the Bulldogs a spark on the floor along with someone else who could put points up and take some of the burden off Raye at point guard.

F – Addison Tarlton (Sr., South Stanly, 7 ppg, 3.8 rpg): On a team where the emphasis was mostly focused on the backcourt, Tarlton’s contributions on the boards and rebounding were another big part of South’s success this season.