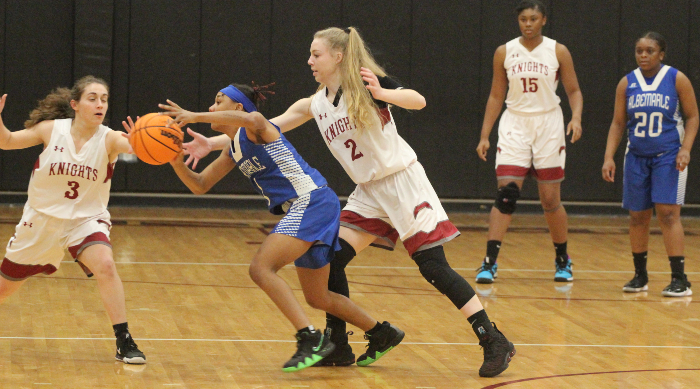 Danielle Werts (No. 2) goes for a steal in the Knights' home game versus Albemarle this season. (File Photo)

Sometimes in the sports world, we live in a place where two teams or players are diametrically opposite to one another, and not just on the court.

Such is the case of the 2019-20 All-Stanly News & Press women’s basketball selections as compared to the men’s squad.

Whereas five selections out of 15 total on our men’s team are underclassmen, only one sophomore is a member of the women’s team as you will see below.

So here are the selections for top honors.

Coach of the Year – Robert Stack, Gray Stone: This was not a difficult selection when you consider some of the numbers the Knights racked up this season.

Gray Stone reached 25 wins for the second time in school history and set a mark for best overall winning percentage (92.6 percent) in going 25-2 and reaching the third round of the state playoffs.

Player of the Year: Several players in my estimation made their case for Player of the Year, including Danielle Werts and Seccora Medley of Gray Stone, Shada Wall from Albemarle and North’s Goode.

However, Werts just stood out this season by leading her team in points and assists per game. She was named the YVC Player of the Year. She also hit a career mark in points as well.

So here are our selections for the first and second team by position (with another three-guard starters for the first team) along with several deserving an honorable mention.

The senior led Gray Stone in points and assists per game and was the YVC Player of the Year.

The Bulldogs guard also finished the season shooting 53 percent overall from the field.

Goode has a strong offensive game while also adding just over three steals per game.

The power forward for the Knights was a force down low on the boards and presented matchup problems for most of the teams Gray Stone played this season.

F/C – Seccora Medley (Sr., Gray Stone, 12 ppg, 11 rpg): Medley’s athleticism and determination were among the strongest I saw this season for sure.

Averaging two blocks per game as well, Medley had the ability to alter shots in the lane or flat out just not allow a shot to go up. She could also dribble the ball down the court well after clearing a defensive board and showed some touch from the outside in the playoffs when her team needed a boost.

More than her shooting, though, was the team leadership she provided for four seasons for the Comets.

G – Krystin McLendon (Sr., Albemarle, 13 ppg, 4.5 rpg, 4 spg): You know you are getting old as a reporter when you start covering the children of people you covered when they were in high school.

McLendon, the daughter of former Albemarle standout Charlotte Phillipy, was just such a player with a strong all-around game, a good shot on offense and active hands on defense.

G/F – Carmen Bishop (Sr., West Stanly, 7.7 ppg, 5 rpg):  She gave the team flexibility by being able to handle the basketball as well as play forward.

C – Raelee Furr (Sr., West Stanly, 7.5 ppg, 5 rpg): This senior fought an injury early on but was able to give the team solid minutes in the latter part of the season.