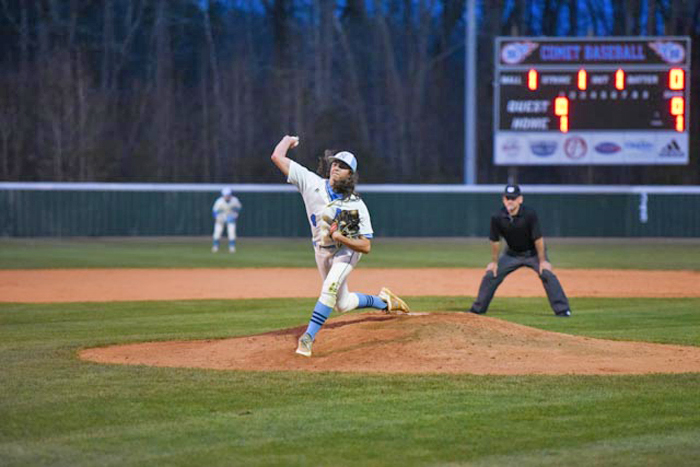 Rhett Lowder fires a pitch to the plate in the Comets' versus West Stanly this season. (Photo contributed by Dawn Lucas)

The 2020 high school athletic season, while being shut down in terms of games played on the fields, continues in terms of awards and honors for the athletes of Stanly County.

North Stanly season pitcher Rhett Lowder, who will be playing for Wake Forest next season, received another honor being named an All-American by baseball recruiting website perfectgame.org.

Lowder played with the South Charlotte Panthers in travel ball and signed this past fall to play next season for the Demon Deacons. He was the 2019 Pitcher of the Year for the Stanly News & Press and earned numerous honors from the Yadkin Valley Conference.

This season, Lowder pitched in 13.1 innings striking out 27 batters with one walk and with no runs allowed and just four hits.

“It is a nice achievement especially coming right now to give a little bit of motivation to keep working in this time where we can’t exactly play,” Lowder said.

“But it is a true honor to be on the list with the best players in the nation.”

Perfectgame.org is a website dedicated to the coverage of baseball from high schools to Major League Baseball and all levels in between.