Reaching out to others through drive-thru prayer 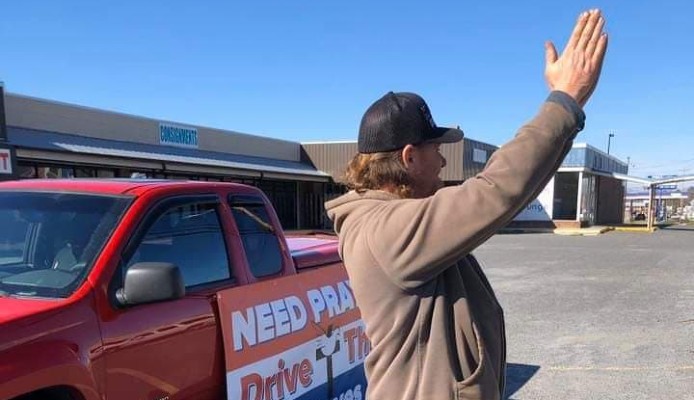 Stephen Bledsoe waves to passersby at a drive-thru prayer located in Albemarle. (Contributed)

One person has taken the idea of praying for people to a more active level by going out and having a drive-thru prayer setup.

Stephen Bledsoe, in an effort not affiliated with a church or seeking donations, has recently hosted people in a parking lot on Main Street next to the old bowling alley and prayed for them.

“I’m just trying to tell everybody about Jesus…that’s what it’s all about,” Bledsoe said about the reason for his efforts. “I want everyone to know Jesus loves them.”

He added he wanted to reach out to people who were struggling and needed prayer but might not want to go to a house of worship.

“So I go to the street and try to offer it in a different way,” Bledsoe said.

Bledsoe attends Congregational Christian in Albemarle, but he tried to pray for people on the street before attending it, having started the first week of December 2019.

Response to his efforts have slowed in recent weekends, Bledsoe said, but added it would not stop him from trying to pray for people.

“The most I have had is six people stop on a Saturday morning…sometimes it’s two or four (people),” Bledsoe said.

With the current situation of the COVID-19 virus, he added he felt it was more important now than ever for people to find Jesus.

“I hope this will open people’s eyes. I completely understand social distancing, so as I post on Facebook every Saturday before I do what I do, (I tell people) you don’t have to get out of your car. I can talk to you through the glass,” Bledsoe said.

People have tried to stop and give him money, which at first he rejected, but Bledsoe said he was told by not taking their money he was rejecting them. Anything he has been given, he said, he has given away.

“I don’t want the money; that’s not why I’m doing it,” Bledsoe said, noting he is also looking to give away some Bibles.

“Honestly a year ago, I would of never thought I would be doing this. Holy Spirit put it my heart and gave me the courage to do it.”