The spread of the COVID-19 virus has continued throughout the nation, state and in Stanly County and it now has reached one of the county’s elected officials.

Matthew Swain, chairman of the Stanly County Board of Commissioners, confirmed in a phone interview Monday he tested positive for the COVID-19 virus. 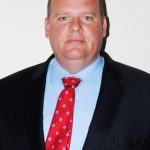 He was tested early last week, Swain said, after having a virtual healthcare visit March 29.

Swain said his family had already done some self-isolation prior to getting sick. He said his family quarantined itself after the positive test. He added his wife tested negative for COVID-19 despite having some flu-like symptoms and their children were in good health.

When he went to the Stanly County Health Department, Swain said he was considered a “presumptive positive” due to his symptoms, including shortness of breath. The test later came back positive.

Swain works as the career development coordinator at Montgomery County Early College. He said he had been around no more then three staff members in the office, having teleconferenced using his work computer, when doctors said he was in a more contagious period.

At the March 16 meeting of the Board of Commissioners, the board had already decided to cancel Monday’s regularly-scheduled meeting. County Manager Andy Lucas said the board during that meeting was already practicing social distancing.

Lucas said Swain was not symptomatic at the meeting, adding the closest anyone may have gotten to him was on the dais.

With the virus having a “community spread,” Lucas said he had as much chance to catch it in public as that night. He said Swain had let board members and staff know he had potentially come into contact with the virus.

Lucas said no one else in the office has had symptoms. He said the situation became more personal upon hearing of Swain’s sickness.

“When you know (a person with COVID-19) it becomes personal for folks. I think they begin to pay more attention to it,” Lucas said. “Hopefully it’s something that folks will take heed to and realize social distancing and staying at home is important.”

Lucas said the situation was another reason the board conducted an online meeting Friday to approve granting two weeks of paid leave for county employees.

Referring to community spread, Swain said he had absolutely no idea from where he got it. He added the shortness of breath was the most concerning part of it. Swain and his wife had some symptoms which he termed as fairly mild.

“(Shortness of breath) was the scariest part of it. Luckily, we didn’t have to go to the hospital,” Swain said.

He did let Stanly County Health and Human Services Director David Jenkins know about the test because of his position with the county.

Swain said he knew COVID-19 was a serious issue because of data the board had received.

“I guess it does hit home a lot more when you find out you have it or where you got it, knowing that you were near somebody that was sick,” Swain said.

The chairman said everyone in the community should take the threat of the coronavirus seriously.

“If people can stay home, I would encourage them to stay home…I know you feel the need to get out and about, but get in your car, drive down the road a little bit and then come back home. Don’t interact with a whole lot of people,” Swain said.