Henry Lee “Buster” Thompson served as a town councilman for Norwood from around 1996 to 2012, according to Town Administrator Scott Howard. 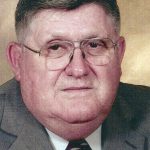 “(He) always had the best in mind for the Town of Norwood. He would always put Norwood first. He will be truly missed,” Lilly said.

“Norwood is grateful for the years of service Mr. “Buster” Thompson gave our town by his many years of being on our Town Council,” Howard said.

Dwight Smith, former mayor and town administrator for Norwood, said Thompson was an outstanding athlete in high school. Thompson played baseball and basketball for Norwood High School before graduating in 1953.

Smith said he believed Thompson was an elected official who never had a personalized agenda.

The former Norwood mayor added Smith was a person who had a calming effect overall on the town’s council as a whole.

“He was quiet and would study the issues you were considering,” Smith said.

The two also went to church together for years at First United Methodist of Norwood. Thompson was also a member of the Sunday school class Smith taught.

Smith said Thompson did a lot for Norwood in many ways, and was supportive of activities for young people.