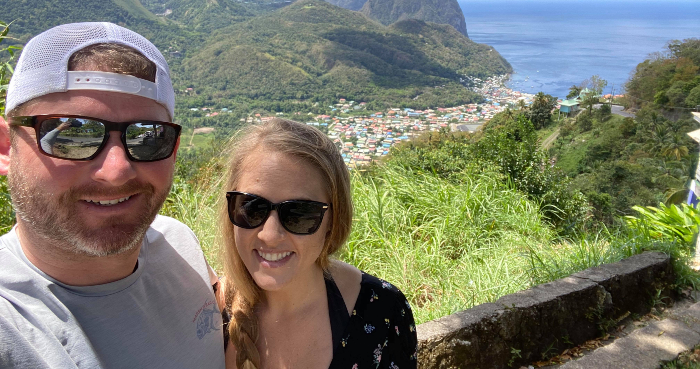 Edwin and Lauren Holland pause for a picture in St. Lucia during the couple's recent honeymoon. (Contributed)

St. Lucia is an independent island country in the Eastern Caribbean, where many people from the United States and other countries enjoy sunny vacations.

One couple’s journey just showed how much lives have been impacted by concerns around the COVID-19 pandemic.

Richfield native Lauren Holland, and her new husband, Edwin, saw a beautiful wedding and tropical honeymoon turn into a juggernaut of miscommunication, red tape and despair.

The couple were stuck for 15 additional days in St. Lucia unable to be honeymooners on a vacation with the island basically closed down.

But like nearly every good romantic comedy movie, this story has a happy ending.

The journey for Lauren Rogers and Edwin Holland began 20 years ago when they met in high school.

It was not until November 2018 the two started dating, with her living and working in Wilmington doing postpartum visits for the health department while Edwin worked in sales for Lebanon Seaboard Corporation.

In October 2019, the two became engaged and planned a wedding in five months.

Making the Best of Things

The real concerns about having to postpone the wedding and honeymoon started for the couple, Lauren said, about two weeks before the wedding in early March.

“We started getting news that it was getting worse,” she said.

Lauren called the wedding venue, The Sweet Magnolia Estate in Cornelius, when the announcements came down about limiting gatherings to 100 people. Eventually as the number was whittled down to 10, the venue said they could not have the wedding there with 10 or less.

In order to get married, the couple found a new place and had a ceremony with basically family only four days before March 20.

With the ceremony thrown together and the reception plans changed, Lauren said she and Edwin decided they really wanted to keep their honeymoon plans.

“Everybody was ready; everything was planned,” she said. “For me, that part of the story plays into what is going on now,” referring to the disappointment of not having the wedding she had planned.

The couple spoke with their parents, American Airlines and the person from whom the couple was renting a house in St. Lucia for the honeymoon. From those conversations, they decided to go, at least for a couple of days.

“We really did as much research as we could. (American) said the flights were coming and going from St. Lucia as they happened normally,” Lauren said.

The new Mrs. Holland said the airline told her if a shutdown happened they would have at least 24 hours to get a return flight booked.

“Even if we’re there for just a two-day honeymoon, let’s just get there and relax,” Lauren said she and her new husband decided. “We did know there was a risk, but hindsight is definitely 20-20…this is the first time anyone has ever experienced a pandemic like this. It could have been that it wasn’t a big deal.”

She said she does not feel selfish for wanting to go on the honeymoon, given all the research and conversations the newlyweds had before going.

Lauren said even if they were delayed for a couple of days, even two weeks, their respective workplaces would be OK with it.

“We had no idea it was going to be a total shutdown of flights coming in and out,” she said.

The couple heard a number of varied opinions, from being careful about flying on a plane to others saying, “Go for it,” which they did.

Lauren said the house was beautiful and the view was gorgeous from their spot in St. Lucia, with a pool and everything.

A resident of St. Lucia kept an eye on the couple, Lauren said, whose job it is to watch the house while the owners living in Atlanta are away.

After two days, the hotels and resorts started to shut down, with restaurants going to take out only. So on March 24, the couple moved their flight up two days to March 27.

“We were just like, ‘We’ve had a couple of days here. We’ll go ahead and get back home,’ ” Lauren said.

She said they had both confirmed the flights and American said flights were going in and out normally that week.

By March 25, she said a couple of other flights were canceled, but not all of them.

“At that point, there was at least one flight a day going out, so we thought we were good,” Lauren said.

What the couple did not know at the time was the last flight out of St. Lucia happened March 26, the day before they were scheduled to leave.

“We were notified Friday. We had packed up everything Friday morning and got in the car, gotten everything done at the house and headed to the airport,” Lauren said.

As her husband was driving them down the road on a 90-minute trip to the airport, his phone rang. When Lauren looked at it, the information said the flight was canceled, which the couple got just four hours before departure.

In speaking with a St. Lucia tourism manager, Lauren said the manager, along with the hotels and resorts, had received info from other airlines like Delta saying all flights were canceled.

Things continued to get worse for the couple who tried to make flight arrangements four or five times with other companies, but they all ended up being canceled.

Edwin’s job  requires a lot of travel, making him a frequent flier with American.

Ross Feinstein, who works for American Airlines in corporate communications, said via email the company had tried to give as much notice as possible to its customers.

“However, government restrictions outside the U.S. have occurred suddenly, impacting our ability to operate to foreign countries,” Feinstein said.

Having already moved out of the house they were renting, the Hollands would have had no place to stay. Luckily, they worked out a deal with the house owner and moved back in.

With curfews continuing to be issued and restaurants completely, closed, the Hollands had a pressing need to find food. Eventually, a 24-hour curfew had Lauren and Edwin basically trapped at the house.

“Everything on the island closed down. You weren’t allowed to leave. If you did, it was a possibility to be fined and you could be put in jail for three days,” Lauren said.

A representative from the travel agency got some food for a few days to the Hollands before the 24-hour curfew.

Eventually, the curfew was lifted and gas stations were allowed to open for six hours. So the Hollands found themselves standing in line with residents buying water and food to get by.

Lauren gave credit to the tourism manager, saying members of that office really looked out for the couple’s well being.

Looking for a Lifeline

The one thing the Hollands did have to try to get home was technology.

Lauren said the couple called the closest U.S. embassy, which was on the nearby island of Barbados. They filled out a form from the embassy online for the Smart Traveler Enrollment Program (STEP). The program lets travelers enroll their trip with the closest embassy.

“That’s their way of communicating with us, through the STEP program,” Lauren said.

The response was basically they had no information, but the couple would be emailed when they had information.

U.S. Sen. Thom Tillis’ office in Washington, D.C., had contact with the Hollands, according to Daniel Keylin, a representative of the senator’s office.

“Our office has been assisting a number of North Carolina families who are or have been stranded abroad. We are helping them navigate this process and provide them with information during a stressful time,” Keylin said. “Our office is in close contact with the State Department for all cases, which have been challenging as flights across the world are being canceled and as foreign governments implement their own shelter in place and lockdown regulations. ”

“American continues to work with the U.S. State Department regarding options to assist our customers, along with other U.S. citizens and lawful permanent residents,” American Airlines’ Feinstein said via email.

The good news finally came to the young couple last week and showed the power of social media during the pandemic.

Jill Nierman, another American citizen stuck in St. Lucia, from San Francisco, had run out of medicine and was trying to find her way home to the Bay Area.

Neirman and Lauren had been communicating with each other during their time on the island after Lauren connected with her on Facebook.

Neirman, through a friend of a friend, were able to set up a charter flight along with the help of the St. Lucia government, who got a pass for the plane to land at the closed airport.

Along with five other Americans, the Hollands were able to charter a flight at great expense out of St. Lucia. The couple landed in Miami Friday night and were due back in the Carolinas in a few short hours.

“Basically we felt that we were not going to get out until May if we didn’t take the (charter) flight and pay the amount of money,” Lauren said, adding they paid quite a bit of money for the trip. “They kept saying they were working on it but couldn’t guarantee anything…there were a lot of people working behind the scenes.”

With the Hollands safely back in America, the couple reflected on the whole experience.

Edwin said the government should hold commercial airlines accountable to make sure U.S. citizens can get home, especially in a pandemic like this.

Lauren said she discovered the flights were shut down by the individual airlines and not the St. Lucian government, adding there were available flights on airlines other than American three to four days after their flight was canceled.

“The U.S. Embassy did not help us when we needed them,” Lauren said.

She said the whole experience has brought the two newlyweds closer together.

“I feel like it strengthened us from the very beginning,” she said. “You learn to work together and figure things out together. I definitely think it made us stronger.”