Runners, walkers to have new resource to explore downtown Albemarle 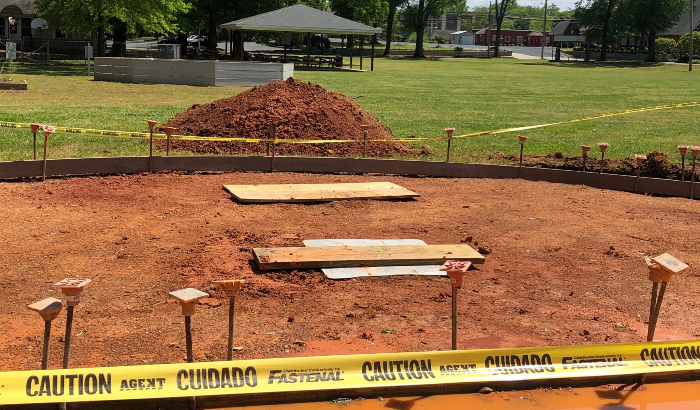 Construction has broken ground at the YMCA Park for a new walking/running information kiosk. (Contributed)

Folks living in the city of Albemarle looking for new routes for walking and running will have a new way of discovering and following scenic routes soon.

Construction began recently on an information kiosk at YMCA Park which will inform runners and walkers of 11 downtown walking routes.

A motion was passed by the Albemarle City Council at the Oct. 7, 2019 meeting, presented by Kiser and others from the city.

Routes will vary in length, Kiser said via email, and will connect the downtown area. The kiosk will have maps and routes posted on it per an agreement with the Stanly County Family YMCA.

These wayfinder medallions will help walkers and runners navigate the new routes in Albemarle. (Contributed)

A series of wayfinding medallions have been installed to allow walkers and runners to follow routes. The City of Albemarle’s website will also have a page dedicated to the walking routes with maps and directions.

Vac & Dash committed to contribute $2,500 to the project while work on the kiosk has started by staff from AP&R and Public Works.

Kiser said work on the kiosk should be completed by June 1.