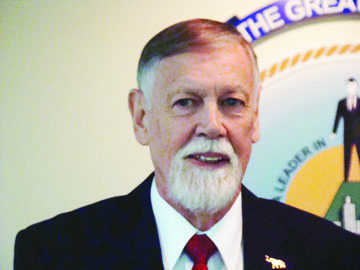 The board unanimously passed a motion to rename the Commons Room to the Gene McIntyre Room in memory of the former vice chairman of the board who passed away March 24.

McIntyre served on the Board of Commissioners for 20 years and was also an educator, having been a teacher and principal for Stanly County Schools as well as coaching football. He graduated from Appalachian State University and the University of North Carolina at Charlotte.

County Manager Andy Lucas was approached by Commissioner Zack Almond about doing a resolution acknowledging McIntyre’s contribution to the board. Almond said the county manager mentioned potentially renaming a room in the county offices for McIntyre.

Renaming the room was not on the board’s original agenda as issued before the meeting but was added during the meeting per board approval.

Almond quipped 20 years was “a whole lot of board meetings” and “a whole lot of budget meetings.” The commissioner added “Gene’s dedication to public service and community should be an inspiration to us all.” He then made the motion to rename the room.

The board delayed the renaming of the room to July 1 to allow for special called meetings officially announced in the “Commons Room,” like for Operation Blue Sky, to not have to be reissued.

The resolution was passed unanimously.