Celebrating a birthday in the time of COVID-19 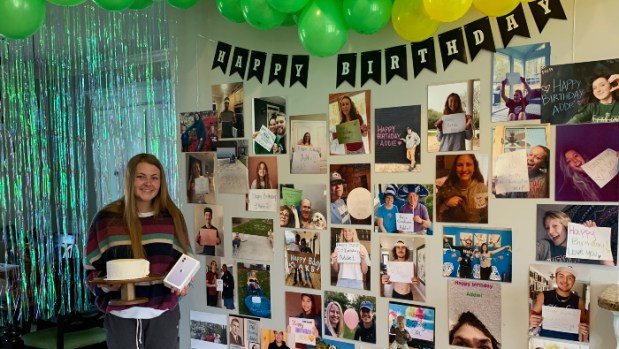 Addie Barbee poses with her "cake" made of toilet paper and selfies from her friends and family as part of her recent birthday celebration. (Photo contributed by Jennifer Burris Barbee)

When the governor issues an order to get people to stay home in self-quarantine, what’s a parent to do to celebrate their child’s birthday?

In the case of one Stanly teen and her family, technology turned a wall in her house into her own personal Facebook birthday post.

Addie Barbee, a junior at West Stanly High School, got a surprise on her 17th birthday April 2 when she found a wall of selfies from friends and family in the living room of their house.

Her mother, Jennifer, said she got the idea from Pinterest as other parents find ways to celebrate their children’s birthday in the time of the coronavirus.

One idea involved coordinating a parade in front of the house of a birthday person’s friends, but living out in the country, Jennifer said that did not seem to be right.

“We can’t have a party with all her friends, so I thought, ‘How can I get her friends to come to her?’ So the selfie idea came into play,” Jennifer said.

She asked Addie’s friends and family to take selfies of themselves to send to Addie wishing her a happy birthday.

“They do TikTok and selfies on Snapchat all day so long, so I figured a selfie for her wouldn’t be that horrible of a thing to ask for,” Jennifer said.

About 40 or 45 people responded to Jennifer’s request and took selfies, including some of her teachers and coaches. Randy Fike, the art teacher at West Stanly, painted a message on the rock out it front of the school. Her club volleyball coach Tom Gray Photoshopped his head onto a picture of Tom Hanks on an island with Wilson the Volleyball as an homage to the movie “Castaway.”

Even beyond the selfies, Dan Rice, a teacher at West Stanly, gave her a shout out in the final minute of his class video as well.

Her birthday cake was a giant chocolate chip cookie cake with the phrase “17 and Quarantined” in purple icing on it.

Jennifer said she appreciated everyone taking time to do a pic and make Addie’s birthday special, noting people are still busy despite many being at home full time.

When Addie woke up, she was not expecting to walk out to see a balloon arch of almost 200 balloons and the photo wall.

“The look on her face was priceless,” Jennifer said.

Addie said she was not expecting anything because of everyone staying home, but she knew something was up.

“I heard them in the living room and I thought they were in there (with) a present or something for me to walk out,” Addie said.

She added she had not made plans because of social distancing, but it was fun to see the streamers and decorations.

Addie’s grandparents, Lisa and Ron Burris, had Little Tokyo delivered for lunch for her as well.

“I will definitely remember this because I thought it was really cool and it won’t really happen again,” Addie said.