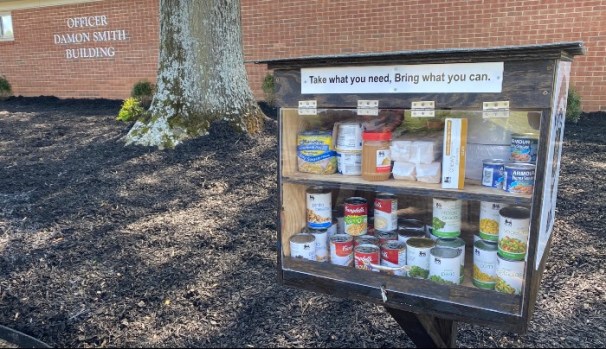 The phrase "Take what you need. Bring what you can" adorns the top of the new community food box in Oakboro. (Contributed) 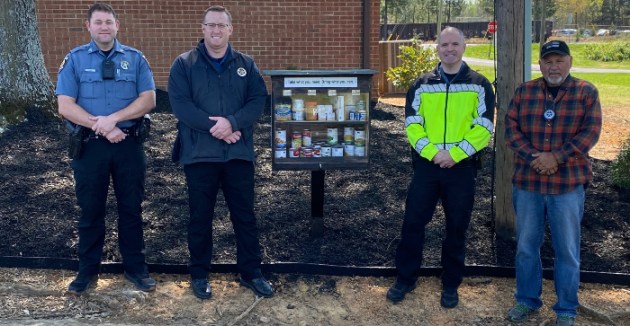 The ability for people in need to obtain free food has become a little bit easier for residents of western Stanly County.

Members of the Oakboro Police Department got together to construct a free food pantry box posted outside the police building.

Oakboro Lt. Mark Shue and Police Chief T.J. Smith were talking one day about doing a free food pantry, having seen it in other places.

“I just thought it’d be a great addition to our police department. especially in a time of crisis,” Smith said. “People need things.”

Shue said he thought it was a great idea and asked the town’s police chief about it.

“He’s all about community,” Shue said.

Photos on the Oakboro PD Facebook page showed the box labeled with the phrase “Take what you need. Bring what you can.”

Any non-perishable items including toilet paper are welcome to be left in the box for people to take as needed.

Shue said he started with a sheet of plywood and built the box along with his son, Hunter, who is an officer in Salisbury, and part-time Oakboro officer J. Todd Green.

“We built a plywood box with a roof and a plexiglass door and put in in the ground,” Shue said.

The Oakboro lieutenant, who has been in law enforcement for 41 years, said people in the current environment are living day to day and not just paycheck to paycheck.

“They’re not working and still trying to feed themselves and their family, and they get frustrated,” Shue said. “This is just one way if somebody finds themselves in a bind, they can come by and get some food for their family. Maybe at some point later on, when they get caught up, maybe they can drop off a few cans.”

He added his philosophy for the town’s police is people just trying to love each other, which he said is who he is as well as the department as a whole.

“We have a job to do. Sometimes in this world, we get looked at different because we have to be the disciplinarians on certain things,” Smith said. “But we certainly are human and we love the people that we protect, so why not help them out in a time of crisis?”

Smith said he and his department have to stay positive in a time like the coronavirus situation and he hopes the new pantry adds to that positivity.