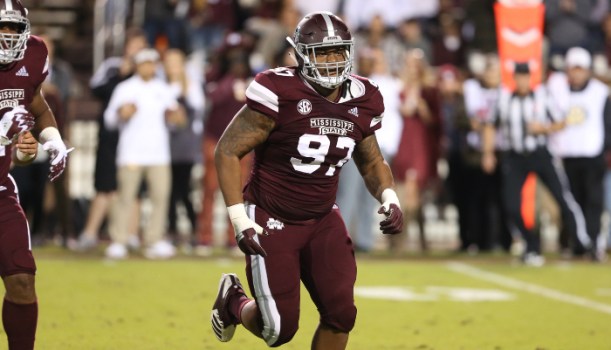 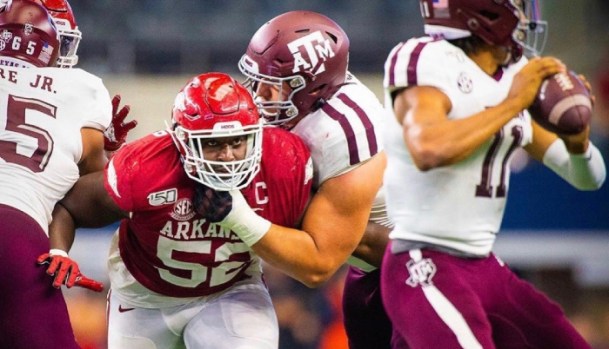 Former North Stanly Comet T.J. Smith fights through defenders playing for the Razorbacks in a game versus Texas A&M. (Contributed) 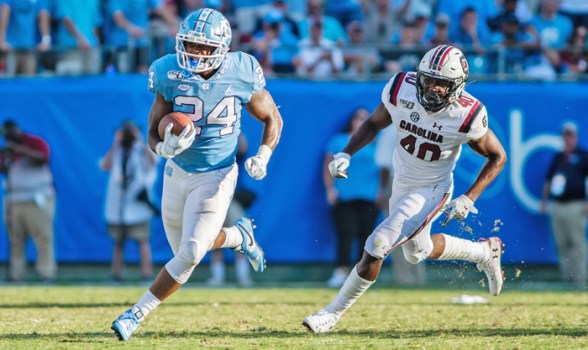 Autry, the younger brother of Indianapolis Colts’ Denico Autry, signed with the Chicago Bears, while Williams joins the Buffalo Bills and Smith signed with the San Diego Chargers.

Williams and Smith become the first former Comets to sign with an NFL team. Lee Autry joins a number of former Bulldogs to join the NFL, including T.A. McLendon, Don Montgomery and others.

As soon as the final draft pick was made Saturday night, Williams’ NFL career got its start with a phone call from the Buffalo Bills.

The former Comet, Ohio State Buckeye and UNC Tar Heel running back was asked on the phone by Bills’ running back coach Kelly Skipper if he wanted to come to Buffalo.

Williams emphatically agreed, and a conversation later with his agent hammered out the details of becoming a priority free agent, which Williams said is like being drafted by the team.

He becomes the first four-year player from North Stanly to sign a free-agent contract with an NFL team.

Mack Brown, Williams’ head coach at North Carolina, commented via Twitter on the former Comet signing with the Bills.

“(Antonio) faced so much adversity during his career, but all he did was show up with a positive attitude, be a team leader and do anything he could do to help our team,” Brown said via Twitter. “He’s a physically gifted running back but also played on almost all of our special teams. He’s worked really hard over the last year to put himself in this position and he deserves all the success he can get.”

Williams said: “Any time God gives you abilities, he challenges you to maximize yourself, and that’s what I tried to do. That’s what I will continue to do…to be a better running back. I plan on trying to be at the end of the day one of the best running backs in the NFL.”

“Obviously, he did something big from Stanly. He’s another example of something I was trying to do myself, which is show people, the younger generation, (if) you set your mind to do something big, you can easily do it,” Williams said.

Ralph Jackson, the former North head coach now at Anson County, recalled a story between Williams and Smith from the North Stanly weight room showing how the two were good for each other.

“They competed in everything they did. I can remember we were in the weight room working out on (the) hang clean,” Jackson said of the exercise the two players were doing. “Antonio was repping 225 (pounds); at the time T.J. could only get 185. Antonio talked so much junk to T.J., two weeks later T.J. (was) repping 225 with him and they went until they couldn’t go anymore. Those are the memories that come to mind, when I think of those two.”

North head coach Scott Crisco said he was proud of Williams for making the NFL.

“From the first time I met and coached him in the fourth grade, he had one goal: make it to the league. A lot of football players say that, but he backed it up with hard work and dedication,” Crisco said. “As great of a football player he is, Antonio is even a better person and friend. I have no doubt that whatever he puts his mind to in life, he will be successful because of his personality and work ethic. He has an infectious smile that makes everyone want to be around him.”

Lee Autry’s journey to the NFL mirrored that of his older brother, Denico.

Lee Autry spent two years at Itawamba Community College in Mississippi where he finished ranked second-best defensive lineman and a four-star recruit heading into his final two years of eligibility.

“I was down there as soon as I graduated high school and started off camp,” Lee said. “It helped me learn how to take my game in a certain way. When you start out, you don’t know how to play yet. Once I got down there and played against those high-caliber guys, it taught me how to turn up my game.”

Lee received an offer after his freshman season to go to Mississippi State, where his brother played, but he did not sign until the following year.

He started five games for the Bulldogs and had 23 career tackles and 0.5 sacks, learning from other players headed to the NFL.

“I just saw they did it, picked up some of the things they did,” he said.

Autry said he overcame some academic problems his senior year, finally playing in four games, which he said may have contributed to not being drafted.

He said he got the call just after the draft from his agent, who called twice. The second time was to say, “You are a Chicago Bear.”

The newest Chicago free agent said his path to the NFL was not intentionally done similarly to his brother.

“Everything happens for a reason. It panned out that way,” Lee said.

Saying he did not lose faith when he was not drafted, Lee said he knew there was another way to the league and to trust the process.

Now one of the “Monsters of the Midway,” Autry said he is glad to be joining a team so noted for its defense year in and year out.

Lee said he is staying in shape and working on his craft every day to be ready should the NFL get back to work.

From Comet to Packer to Razorback to Charger

Coming out of North Stanly Middle School heading to high school, T.J. Smith was not thinking about football at all.

Jackson challenged Smith to a game of basketball with the stipulation Smith would play football for the Comets if Jackson won.

One win on the court turned into multiple wins on the football field for the Comets.

The origin of the turnaround of the North Stanly football program in the 2010s began in part with Smith and his teammates efforts in 2013.

After back-to-back 2-9 season under Jackson, the Comets set marks across the board in 2013, Smith’s junior season and final with the Comets. North finished 9-4, just the second time in 52 years the team had won nine games in a season. The Comets also hosted its first game in the state playoffs, beating Bishop McGuinness 27-14.

“It was awesome being at North Stanly. I’m so glad I decided to put on pads, go out there and play football,” Smith said. “There were a lot of guys on that team that made it go. A lot of us had played together since an early age.”

“We just had such a good relationship,” Smith said. “Guys had worked so hard in that offseason…Coach Jackson really pulled it all together.”

On the heels of that success, Smith transferred to Colquitt County, Georgia, for his senior season, helping the Packers win the 6A state title going 15-0.

Smith said playing for the Packers and head coach Rush Propst helped prepare him for college with his knowledge of the game and the types of players Colquitt had.

“It was like college before college,” Smith said, noting the town would shut down and between 15,000 and 20,000 would be at home games.

“The Lord blessed me with physical ability…all you can do when you get that is nurture it. He put me in a great position and gave me all the tools.”

Smith went on to play Div. I football for the Arkansas Razorbacks, where he played in 27 games and amassed 48 tackles, including 28 for a loss with four sacks. He was also a SEC Academic Honor Roll member three times and was named to the 2018 SEC Community Service Team.

Playing football in the Southeastern Conference was similar to playing basketball in the ACC in terms of the level of play, he said.

“When you play for a school like Arkansas and you wear that logo, the hog, it does something to people when they see you in the community,” Smith said. “It’s a crazy reward getting to see those smiles on children’s faces, adult faces, elderly faces.”

Smith said he was so thankful for all the people that helped him get to where he is today, which will be on the West Coast once the NFL gets back to work.

He added he does not know much about Los Angeles but he is “going to trust the Lord.”

“He’ll take care of me and everything will be alright. I’m excited.”