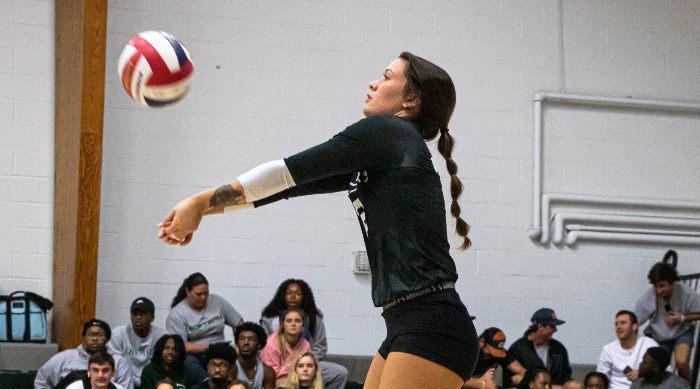 Brienna Laskowski gets a dig for the William Peace Pacers. (Contributed Photo)

A former South Stanly standout on the volleyball court received a top honor from her NCAA Div. III school after an outstanding season.

Brienna Laskowski, who last played for South Stanly in 2016 and graduated the following spring, was named the 2019-20 Bierce Most Outstanding Athlete at William Peace University.

Named for Jeannie Grey Bierce (Class of 1986), the award is given annually to a female student-athlete who had the greatest impact on the university’s athletic program. Bierce was a scholarship member of the Peace College women’s basketball team who lost her battle with ovarian cancer Aug. 3, 2001, when she was just 35 years old.

Laskowski, a multiple All-Yadkin Valley Conference and All-Stanly News & Press selection while at South, led the Pacers this season with 357 kills, averaging 3.3 kills per set.

The award ceremony for the Pacers, called the Derbies, was posted on YouTube instead of an in-person banquet due to the COVID-19 pandemic.

Laskowski said she had not been watching the broadcast, instead working on her finals which included a meeting on Zoom. She said the Most Outstanding Athlete awards “usually go to top notch athletes and I didn’t consider myself one, I guess.” She said the school’s women’s basketball program was outstanding, along with women’s lacrosse.

“I know I didn’t put myself in that category,” Laskowski said.

After the award was announced online, Laskowski got a congratulatory text from a teammate, which is how she found out about the honor. When her boyfriend told her she had won an award, Laskowski got on YouTube and watched the clip.

“It was sweet; it was nice. It definitely threw me off; I didn’t expect it at all,” Laskowski said.

Laskowski said she did not expect the award because of the struggles in the season due to the loss of several key players. She changed positions 10 games into the season, moving from a right-side hitter to outside hitter.

“I kind of went back and forth (between positions),” she said. “Whatever my coach needed, I just played on.”

The entire season, Laskowski said, felt like the team always had their backs against the wall.

“Even though we had a pretty good record, we lost some games we shouldn’t. I didn’t really feel like we had the season that I and a lot of others wanted to have,” Laskowski said.

The Pacers went 24-8, finishing third in the USA South Conference’s East Division, losing in the quarterfinals of the postseason tournament to Meredith.

“We had the best passing team this year, of any team I’ve been a part of,” Laskowski said, adding any award like this is more of a team award because of the nature of the sport and the support of her teammates and head coach. “I don’t think I’d be here without my team and my coach.”

After her final season this fall at William Peace, Laskowski said she will go on to earn a Master’s Degree at Florida Southern University in Lakeland, Fla., where she just verbally committed to this past week. She will still have two years of athletic eligibility and play beach volleyball for the Moccasins since she is graduating early from William Peace.

Nicole Barringer, head volleyball coach for the Pacers, said Brienna, or “Mike” to the team, has been a huge part of the program.

“She is very competitive and hardworking. We set goals as a team and she pushes herself and her teammates to work to achieve them. She wants to win,” Barringer said. “She understands this is a team sport and she will do whatever it takes to help this team win, which a lot of the time means she’s in double digit kills and digs.”

A leader on and off the court, Barringer said Laskowski was named as a captain for the upcoming fall season. The coach also mentioned Laskowski was selected as one of the top seven overall players in the 17-team conference and was selected from Peace’s division as one of its top two players as well.

“Mike has been a joy to coach and build a relationship with…winning the top female athlete of the year here at William Peace is a reflection of all that she accomplished in the 2019 season,” Barringer said. “She isn’t finished. I look forward to seeing how she tops off her indoor career in the fall.”