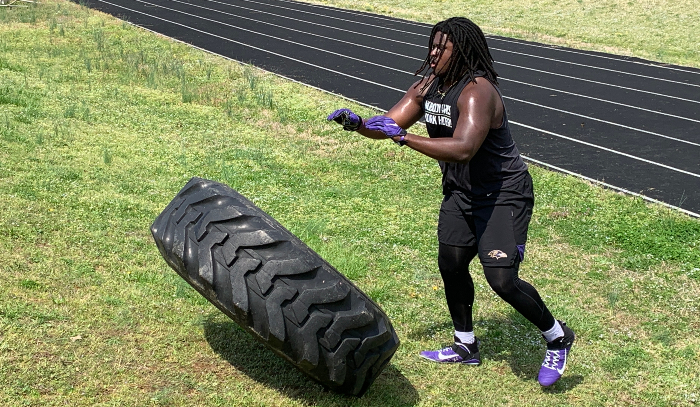 R.J. Prince of the Baltimore Ravens works out on the Albemarle football field to get ready for the 2020 NFL season. (Photo by Charles Curcio/staff)

The COVID-19 virus has effectively shut down sports at every level, even for a group of local pros whose regular season does not start until September.

In the case of two of Stanly’s National Football League players, the challenge has been to stay ready and in shape.

Recently, the NFL made the decision to close all the team facilities due to the spread of the COVID-19 virus.

The former Albemarle and Mississippi State standout has found a professional home with the AFC South’s Indianapolis Colts. He signed a three-year deal with the Colts in 2018.

Autry said one thing which has helped him has been to have a mini-gym in the basement of his house.

Autry’s offseason has included ankle surgery in Charlotte in January, which he said was more about maintenance. He said he was able to do his rehabilitation in Charlotte in a facility every morning.

Autry said the closing of the facilities was tough on some of his teammates because they were rehabbing injuries at the Colts’ facility with the team’s strength and conditioning staff.

In terms of dealing with COVID-19, Autry said he prefers to keep to himself and his family, living out in the country.

“I like to stay out in my zone; I don’t like to be bothered with people,” Autry said.

Autry said he watches who he stays around because anyone can get the virus.

“I’ve tried to quarantine as much as possible,” Autry said.

During his time off, the Colts’ lineman said he has mentally stayed away from the game because he needs to have a break from it.

He said he was getting ready to gear up for the 2020 season.

Many of his teammates are keeping in touch with one another over the phone, Autry said, noting he and his friend, nose tackle Grover Stewart, have talked a lot.

Autry said he and his teammates have had good chemistry throughout this time.

Prior to the stay-at-home order, passersby to Albemarle’s football stadium may have noticed a large tire being flipped over and over again.

For former Bulldogs offensive lineman R.J. Prince, it is home.

Prince, who spent last season on the practice squad of the Baltimore Ravens, said finding ways to get his normal exercise routine in has been a challenge.

Recently, he came back to Albemarle and was running the hills surrounding the football field at the Bulldogs’ football stadium.

He said some of his teammates are down in Florida training, but with gyms closing it makes training difficult.

“There’s only so much you can do like doing cardio, like running. You have to be doing football drills, lifting weights,” Prince said.

The former Albemarle and UNC standout said he had a dumbbell bench press at home which goes up to 160 pounds and a few dumbbells going up to 40 pounds.

“That’s not enough for me,” Prince said.

So Prince takes a large tractor tire and flips it up the hill next to the home stands at the field. He also carries the tire up and down the hill, then runs wind sprints up both.

“When our facility opens back up, I’m just going medieval,” Prince said.