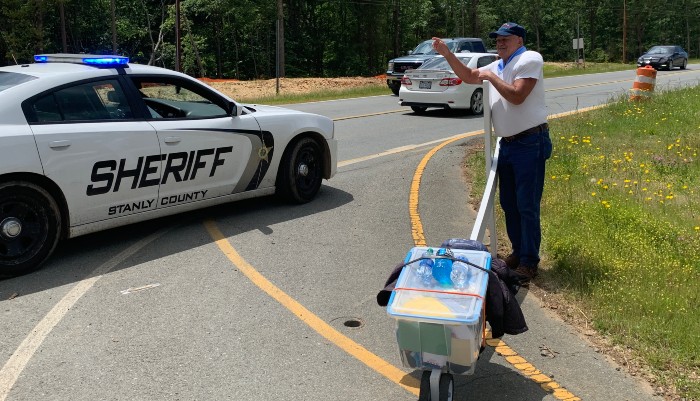 Pastor Roger gates rests for a moment and waves to passers-by Thursday upon entering Stanly. (Photo by Charles Curcio)

Cross walks involving people of faith carrying a large crucifix have taken placed locally in Stanly, but Wednesday saw the phenomenon on a national scale cross the county’s borders.

Oklahoma pastor Roger Gates has embarked on an 18-month journey to carry a crucifix across the United States, having started mid-March at Fort Fisher.

The 71-year-old ordained pastor and born-again Christian drove to Fort Fisher with a friend to start his trek westward.

According to his Ministry of Truth page on Facebook, Gates had a vision from the Lord to build an 80-acre food warehouse. The facility was to supply for needy people both in and out of the country.

Gates is doing this walk, his second across the country, to tell people God loves them and to encourage people to sow into the ministry of the warehouse’s construction.

He added there is a 100-acre plot of land in Braggs, Okla., where the site of the warehouse will be. The land is already mostly clear for a structure. (Note: Here is a link to a Facebook live video of Gates coming into Stanly. https://www.facebook.com/thesnaponline/videos/254840715879793/  )

The food in the warehouse, he explained, will be not just be for America, but for the world.

“The world will know He built it to glorify him, to meet the needs of his people on a global basis when disaster happen,” Gates said.

His warehouse, he added, will not have to wait on the government to make up its mind on how to help during a crisis.

“We can start getting organized and ship stuff in immediately, start helping with major disasters. He told me to fill it with bedding, blankets, emergency supplies, medicines and also food. It’s going to be a major project, but it goes to the people to glorify God,” Gates said.

Ashley Tart, one of the administrators of the Ministry of Truth Facebook page tracking Gates as he goes cross country, said she has never seen anything like this cross walk.

“In the Christian faith, the cross is a symbol of hope, peace and redemption. During this pandemic, people are so desperate for those very things. So, when he comes walking through their communities carrying this cross, it’s like the sign so many have been needing,” Tart said via Facebook. “People of all religions and backgrounds have greeted him with appreciation over what he has set out to accomplish. I’ve seen people with fear and worry in their eyes over all that’s going on in the world around them, who meet Mr. Gates and within moments their demeanor would change.”

Tart said she has seen a sense of peace and joy come over people meeting Gates from a word of encouragement he gives them, while also giving people upon his arrival a positive project on which to focus, coordinating food and lodging for him.

“Mr. Gates is the first to tell you that this is not about him, but about what God has asked him to do. That’s very true, but the vessel God has chosen to use is one that has left footprints on our hearts in each community he has walked through,” Tart said.

She added the page was started by Jessica Herring from Newton Grove when she came through. Tart met Gates three weeks ago, and she said they just bonded over the walk. Since then, she and her sister, Whitney Bain, having assisted Herring in running the group.

A troubled past helped lead Gates to a life of ministry.

Drugs and alcohol after his time in Vietnam drove Gates to prison, eventually to the state penitentiary in Oklahoma.

“I got bigger than I thought I was. I didn’t realize how big and dangerous I got,” Gates said.

Being like a middle man for some organizations, Gates’ attorney wanted to fight but he decided to throw himself on the mercy of the court. He got a 22-year sentence to start with, but by the time he went to prison the charges were reduced to six years in prison and six months probation.

He tried to be a tough guy in prison, he said, but God showed him a different way.

While in prison, Gates said he found the Lord and He came to him as real as life, causing Gates to surrender his life to God.

“Let it be. I surrender all,” Gates said.

He said twice while in prison his mind went blank, but the second time a gentle voice called his name: “Roger.”

“The Father pulled me back to the shore…I placed my life in God’s hands,” Gates said. “That’s the first time in my life I ever surrendered all to the Lord. He’s used me ever since.”

Gates also ministered to other convicts in prison, saying he was able to help around six to find God.

“I’m just been trying to do whatever the Lord has for me to do,” Gates said.

Beyond the cross walks, the Oklahoman said he has helped to save a youth center for a church in the city of Enid. Along with another person from Kansas, the two helped the center raise enough funds for its owners to buy the building back from the bank.

Even just when his first walk was finished more than 30 years ago, Gates said the Lord made it known to him he had one more walk left in him.

But the call came back to him.

Gates said he started working on a second cross for a long time, which he finished about 10 months ago. He also brought his story to a local newspaper in Oklahoma, the Tahlequah Daily Press.

Health concerns were one of his issues, he said, before the walk started. Gates was taking six different pills for his heart, but said God told him He would give him a new heart.

“What he did is he healed my heart. The new part of it is he took man’s love out and put His love in. I haven’t found a person since I can’t love. I may not agree with what they do, but I still love them,” Gates said.

Gates said God told him to get his house in order, which included having a friend live at his house, watching his place, taking care of his truck. His friend only makes $650 a month so Gates has allowed him to use both while he is on his walk.

While entering Stanly County over the Garrison Bridge, well wishers honked and waved while one person driving by pulled up and made a donation to this cause. He welcomes contributions, but for donations in excess of $100 he would like to get a cashier’s check he can mail to the ministry.

A deputy with the Stanly County Sheriff’s Office brought him across the bridge after Montgomery County deputy Jim Lewellen escorted him from Troy down to the bridge.

Going through the mountains pulling a 60-pound cross along with his gear box, wind and rain made his journey from Troy to Albemarle especially challenging.

But once again, Gates said, God took care of him by bringing him to his lodgings in Albemarle just before dark.

“There’s a lot of obstacles that could have been dangerous, but the police came out…I want to thank the people because they were really patient.”

His journey to California will take probably 18 months, Gates estimates, but even once he reaches the coast things may not be over.

“I told the Lord, ‘If you need more time for me to work amongst your people, what you are doing for future generations…I’ll turn around and walk back to Oklahoma,’ ” Gates said.

His Facebook page has more than 10,000 hits so far as well as many buying T-shirts to help support the cause.

“It’s been a great life, a beautiful journey.”

Note: Thanks to Sheri Gourd of the Tahlequah Daily Press for contributing to this story.

To contact the author of this story, email Charles Curcio at charles.curcio@stanlynewspress.com, call (704) 983-1361 or send a message via Twitter (@charles_curcio).