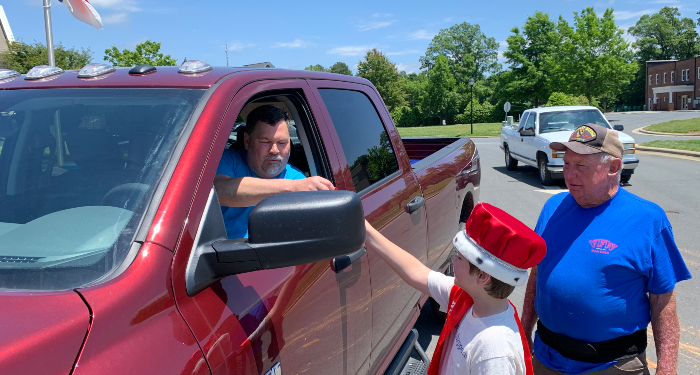 Despite the situation with the coronavirus, one local civic organization honored Memorial Day in a new way.

Locust Veterans of Foreign Wars Post No. 6365 gave away poppies as it is tradition, but it gave out the flowers while also hosting a food drive Saturday.

Post 6365 Commander Bobbi Sheets said normally members of the VFW pass out buddy poppies in five locations while taking donations. However, because of many losing their jobs to the COVID-19 pandemic, Sheets said the post did not feel right taking just donations.

The post came up with the idea of filling a “deuce and a half” Army truck with food donations, which the Locust post collected and gave to West Stanly Christian Ministries.

Locust City Hall and the veterans’ memorial next to it served as the point for a drive-through food drive, where participants donated food and received a poppy.

The poppy tradition dates back to just after World War I after a mention in the poem “In Flanders Field” by John McRae. Poppies are given out “to honor the dead by helping the living,” according to the VFW motto.

Sheets said the idea of the food drive was well received as the VFW got a lot of donations of food and some monetary donations.

“We had to do something for Memorial Day. There was not an option; it’s an important day for us,” Sheets said.

The VFW placed flags in the ground to represent those who may not have a headstone, along with having put out flags at 15 local cemeteries.

“Even in this phase…it’s important for us to take care of the business we have,” Sheets said.

During that ceremony, five officers of a VFW post present items symbolizing a veterans’ efforts, including an evergreen sprig, wreath, flag and a white rose.

Sheets also said the VFW is helping out about five to seven local vets who have lost their jobs due to the pandemic.

Patricia Blaney, daughter of Charnley, and the Post’s treasurer for the Auxiliary, said the ceremony helped the family a lot as they go through the grieving process.

“Having to try to put together a memorial service right now is overwhelming,” Blaney said.

She said the ceremony was meaningful because of how much her father was involved with the Locust post.

“This was his life. It meant so much to him to be a part of (the Locust post). For the Post to be able to do that was just so (meaningful),” Blaney said.