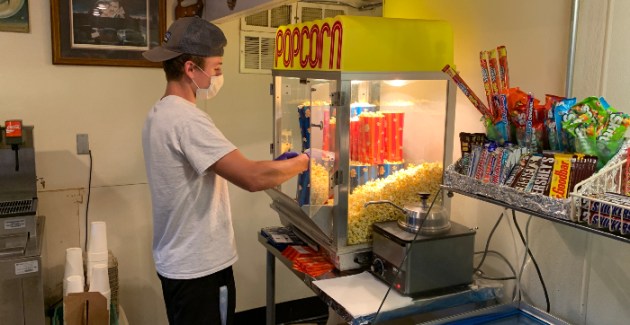 Duncan McSwain fills bags of popcorn to get ready for moviegoers Friday. (Photo by Charles Curcio/staff) 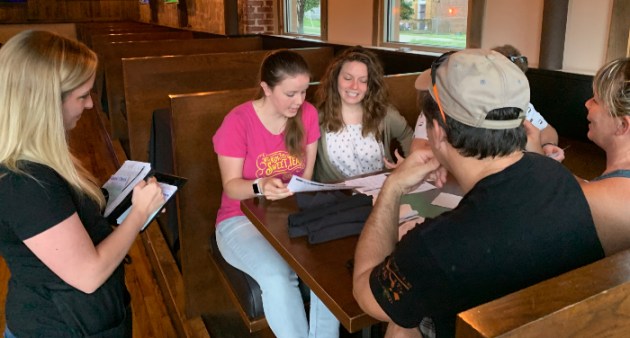 Server Ande Nash, left, takes the order of the first table to be served Friday. Also pictured are, from left, Callie Donaghue and Megan Donaghue. (Photo by Charles Curcio/staff)

Despite a tornado warning and the predictions of heavy rain, customers were waiting outside one Stanly restaurant and pulling into the Badin Drive-In as the easing of business restrictions opened Friday.

Five Points Public House in Albemarle was one of numerous restaurants to reopen under restrictions.

Restaurant dining rooms are open but only able to operate at 50 percent capacity with distancing and cleaning requirements, as per Executive Order 141 from Gov. Roy Cooper.

Chad Shumate, owner of Five Points, said he and the staff had been preparing for about two weeks before the opening. Staff removed a number of tables from the dining areas as well as installed hand sanitizer stations.

Going from being open to completely shut down at the beginning of the stay-at-home order was tough, Shumate said, noting it was something neither he nor the staff had experienced in their lifetime.

Regarding opening up, Shumate said the staff was “feeling fairly confident with all the precautions we’ve put in place.”

With some tables removed, there will be a smaller capacity of places to serve people, but Shumate said “it was a good way to kind of ease back into everything, make sure we can execute food properly.”

As May 22 approached and the restrictions were expected to be eased on restaurants, Shumate said his staff had been getting phone calls about reopening.

“We will see a lot of friendly faces this weekend,” Shumate said.

Jerri Poulton, one of the servers at Five Points, said getting back to work felt a lot like the first day of school, adding she had butterflies in her stomach.

Poulton said she was excited to see the regulars of Five Points along with her fellow friends and coworkers, as well as getting the morale back of being at work.

“We get so many locals; it’s such a good feeling. It’s a good step in the right direction,” Poulton said.

She said even before the stay-at-home order, the staff had started with the sanitizing processes recommended during the time of COVID-19, which have been increased including social distancing, along with little things like portioning of food, condiments and silverware.

Poulton said being off work has been tough but she was lucky to be blessed with a supportive family, adding the unknowns of the situation have been scary.

“The managers here are great and everyone is really communicative. We all got our jobs back. Five Points has been very good to us.”

Popcorn and a Double Feature

With many indoor entertainment venues still closed due to Order 141, some outdoor places reopened this weekend, including one of the state’s remaining drive-in theaters.

Despite a thunderstorm as the gates opened Friday, cars began to file into the Badin Drive-In.

Melody Dutton, co-owner of the theater with her husband, Steve, spent about two weeks before Friday’s opening smoothing out gravel and marking parking spots to include extra space in order to institute social distancing between families.

Families will be allowed within their own space to sit outside and watch movies but social distancing will be enforced at the concession stand and restrooms.

An attendant will clean the restrooms every 30 minutes, closing them and wiping down everything, she said.

“We have worked together this week; all of these guys are like family. They’ve been together this whole week,” she said, adding they also had received numerous calls about opening back up.

The playground in front of one of the screens will be closed.

Melody Dutton said the capacity of the drive-in will be about 350 cars, which is 50 percent of what the theater can accommodate.

She said the theater was set to open the weekend the first stay-at-home order was issued, which is around the normal time of the year for the drive-in to open.

One challenge, she said, was finding movies to show because of the shutdown of Hollywood during the past three months. Since theaters have been closed, the lineup of movies scheduled to be shown was postponed. The drive-in normally features first-run movies but with no movies running, the theater ran movies which had been out for a while.

“We knew when we would open it was going to be with some older (films),” she said.

Getting cooperation from customers will also be vital, she said, in order to be able to stay open.

Steve said he and the staff were excited about opening, saying they need to be responsible business owners in the time of the coronavirus.

“Everybody looks forward to (the opening). This is one of the biggest draws in Stanly County,” Steve said.

The delay in movies in a way has helped the theater, he explained, so the drive-in’s patrons will not miss out on any of the good movies.

The staff is like family, he added, which helps to create the family atmosphere of the drive-in theater, along with many coming back for the nostalgic atmosphere.

“When the weather is nice…(people) can come out and do a little tailgating with the family, bringing their friends and neighbors,” Steve said.

He said Friday many of the people heading into the theater were being respectful of the social distancing guidelines, adding they had not had any complaints or concerns regarding the guidelines.