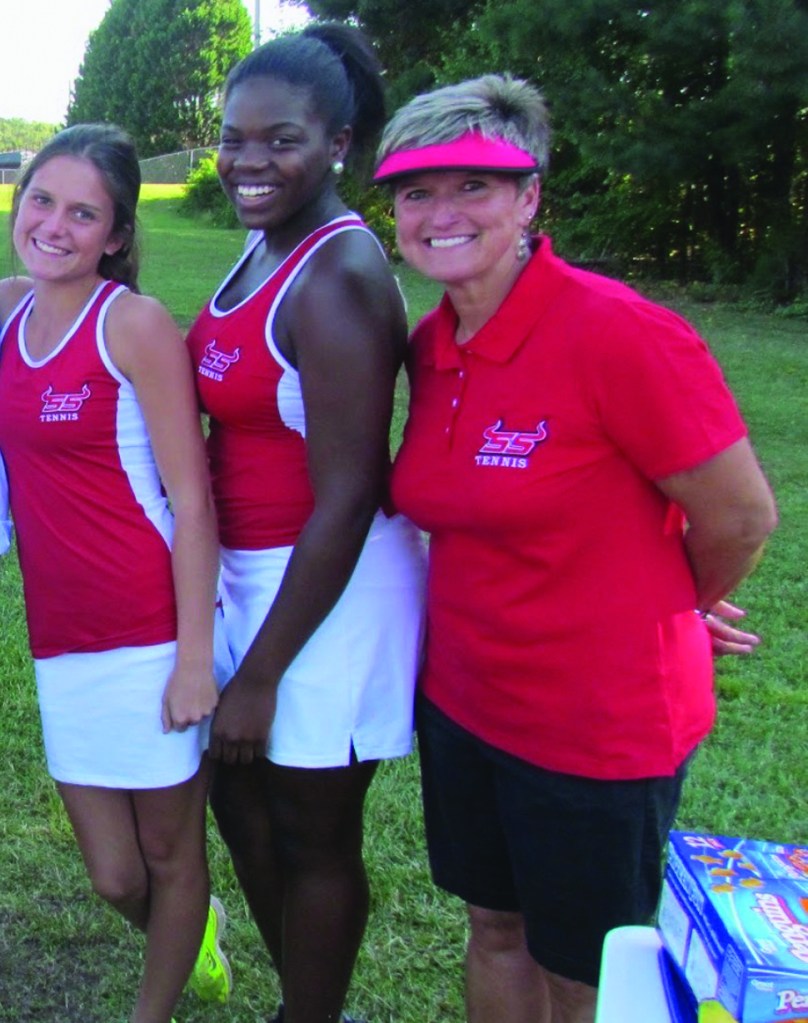 She helped to build one tennis program in the county, then led another for many years while building a family atmosphere around the team.

“It just seems like I’m aging out as an educator, at least at this level,” McSwain said about the decision to retire.

With her son also graduating from South, she thought the time was right to retire.

For the Love of the Game

McSwain went to high school in Robeson County at Fairmont, a school roughly about the size of South Stanly. She played tennis for four years in high school, then took it as as physical education course while getting her teaching degree from UNC-Chapel Hill.

Immediately out of college, she said, McSwain started at West Stanly as a teacher and JV basketball coach in 1989.

After about seven years of coaching, she gave up the basketball position when she got married, having already been part of the women’s tennis program at West since around 1992 or 1993.

Mark Cook, who was coaching both teams, decided to give up the women’s tennis position. McSwain took over, coaching girls who were not much younger than she was at the time.

“When I started (coaching tennis), it was just a delight. The routine for basketball was such a grind,” McSwain said.

Coaching JV, she said, meant you stayed for the remainder of the games through the JV boys and both varsity games which added to the grind.

With tennis, however, “you know it’s your own show. It was such a different experience and I really jumped on it. I was excited about tennis.”

She stayed at West Stanly for 20 years before the opportunity came to teach at South Stanly, closer to where her family lived.

McSwain has coached both tennis teams at South for the past nine seasons, meaning she has coached for 17 years.

Coaching with Enthusiasm and Energy

McSwain said she can teach the fundamentals of tennis, but for her coaching philosophy, she was more about motivation and practice.

“As a strategist and a technician, I’m lacking, but I can be a cheerleader. I can get excited; it is so easy to get excited,” McSwain said.

She said early in her coaching career she discovered if she can get excited about a match, the players will as well. Energy and positive motivation like that are “infectious.”

Tennis is vastly different from other sports, she said, noting it is a sport of civility for ladies and gentlemen.

It is also a lifelong sport which kids can learn at a young age and play for a long time. McSwain also said tennis helps develop a person’s mental toughness.

While there is a team sport aspect to matches, the coach said so much more of it is about the individual’s efforts in their respective matches.

Especially at a smaller school, McSwain noted, the people playing tennis are from very different backgrounds. However, she tried to make it a family atmosphere where players would form friendships.

“We’ve had the big man on campus, really popular kids and we have had a few misfits,” McSwain quipped.

In her history as a tennis coach at both schools, McSwain said she never had to cut anyone, which drew more people out to try it.

“People have been drawn to it because it’s an activity they can do and it’s not a whole lot of pressure,” McSwain said.

Each player, she added, had the potential to improve over four years on the team even if the best players played the most.

“It’s interesting to me what drew people to tennis, the different types of people that would come together and form friendships that would not have otherwise,” she said.

As it happens with smaller schools, many athletes played tennis who played in other sports. McSwain said it was great to see student-athletes like Chelsea Culp, a basketball and softball standout, who went from never having played tennis to qualifying for regionals her senior year.

She also mentioned male athletes like football players Jonah Hatley or Joston Horton, who had not played tennis but brought great footwork to the game learned from other sports.

Playing tennis, she said, also helps players to learn how to lose gracefully and develop humility.

McSwain also credited the boosters for having supported the teams as well throughout the years, even though tennis is not a big-revenue sport like football.

“People played it when they were little and maybe they recognize the lifetime value of (playing tennis). Whenever we needed something, we never got ‘Nos,’ but we never needed much,” McSwain said.

The one thing McSwain and the Bulls did not get to do was celebrate a conference championship, having finished second a few times. South had gotten off to a 5-0 start in men’s tennis this spring before the COVID-19 pandemic closed schools and shut down high school sports.

Winning was not a primary goal for the team, McSwain said, adding players having fun while meetings goals of improvement were more important for her teams, which translated into a more positive experience overall.

For her teams, McSwain’s motto were the Three C’s: competition (wanting to give 100 percent in practice), challenge (challenging one’s self to improve) and character (wanting to be good examples).

McSwain said she may be back in six months because she believes she still has something to offer in some capacity, possibly teaching online.

“We’re all getting good at that and I have had some experience with it,” McSwain said, referring to her time teaching online courses before the closing of schools due to the pandemic.

She said she has also thought about teaching at a higher level of education, maybe at the community college level with her master’s degree.