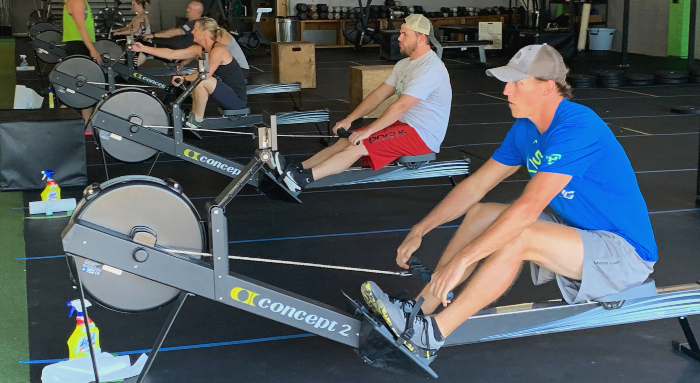 An exemption in Gov. Roy Cooper’s order continuing to keep gyms and health clubs closed has allowed one Stanly gym to open its doors.

CrossFit Albemarle, on Main Street in Albemarle, has opened to allow pro athletes and scholarship college athletes to train in the facility. Those taking classes have signed contracts to be paid to compete in the CrossFit Games coming in the fall, according to Scott Mauldin.

“Everyone that comes in…has to have signed a contract,” Mauldin said, noting Albemarle Animal Clinic is sponsoring the CrossFit athletes for the competitions upcoming in Madison, Wisc. The open competition starts earlier in other places, he added, but the grand prize of the event has a $275,000 award.

“We do this every year. This isn’t a new thing…it’s just drawn attention from everyone that has come by here,” Mauldin said.

He added most people have applauded them for being open. One person came by and had “a very professional debate about what we were doing,” Mauldin said. “That’s the power of two people being able to have a disagreement, but understand the points of view.”

According to the order in Section 8, subsection C, “professional athletes and athletes performing on an agreement with an educational institution to receive a scholarship or other benefit may train within indoor fitness facilities that otherwise would be closed under Subsection A above, provided they do not exceed the Mass Gathering limit.”

Section A mentions gym, health clubs and fitness centers specifically as facilities which were to stay closed during Phase 2 of the order.

One person taking CrossFit classes currently is not under contract because they are a college athlete, Mauldin said, which falls under the exemption.

Mauldin said “every CrossFit gym should be open because…we have a controlled environment.”

He added his facility has 6,000 square feet and the company has increased the number of classes while reducing the class sizes in order to comply with the 10 or fewer indoor facility meeting restrictions. Classes are also trimmed to 30 minutes in duration. Athletes are being asked to wipe down everything they use during the class to protect the next person.

“This is the cleanest place in the county,” Mauldin said, adding with what he said was “no animus intended ” to other facilities, “they can’t control things like when you have hundreds of anonymous members that come and go as they please. It’s really hard to control (that) environment.”

Regarding the order, Mauldin referred to his time being in law enforcement, saying “the last thing I want to do is do something illegal, or even wiggle around it. We are going by exactly what the order said. No one can come in here unless they sign that contract.”

Dr. Sam Griffin, of Albemarle Animal Clinic, who will also compete later this year, said “it’s just an opportunity for us to get in the gym, work out and get prepared for The CrossFit Open. CrossFit supports athletes everywhere and gives them a chance to compete.”

Griffin said he has previously sponsored CrossFit athletes competing in Asheville and Myrtle Beach. He noted one athlete, who competed in the 60-and-over women’s category, finished in the top 120 in the nation.

Other local teams and individuals have reached the podium, he added.

“We are really competitors. While some like myself aren’t on the high end of the scale, it still gives us a chance to compete,” Griffin said, adding everyone training currently is being paid.