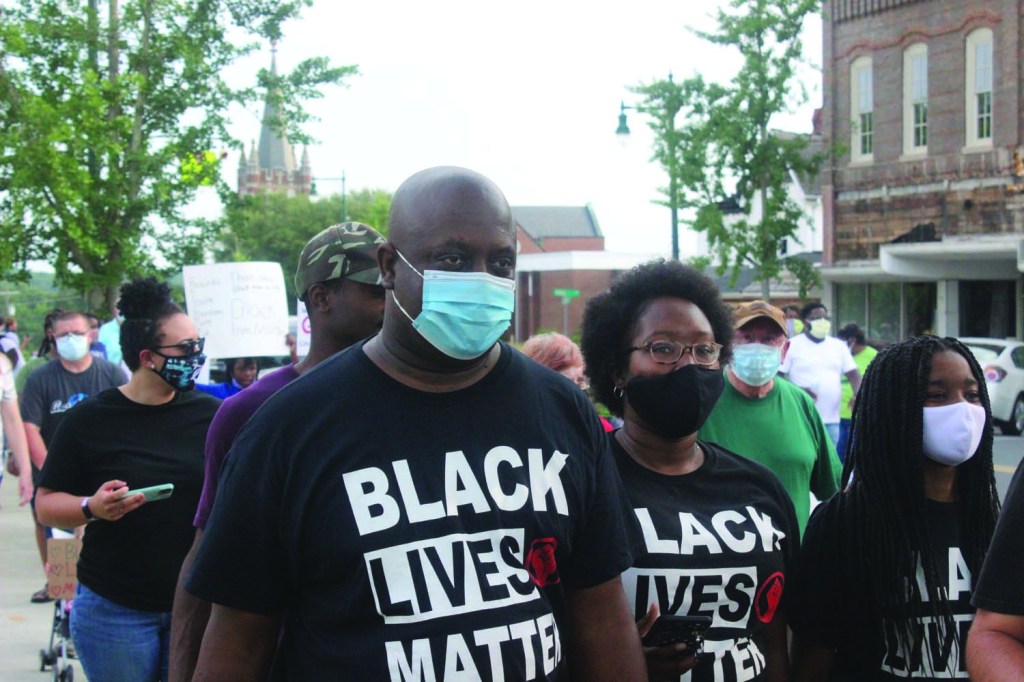 After having a small of people the previous weekend, organizers of a peaceful protest march from the prior week saw a huge increase of supporters for another march Saturday in Albemarle.

Close to 150 people of all ages and races bearing signs in support of the Black Lives Matter movement marched through the streets of downtown Albemarle.

The march took the same route as before, starting at the Stanly County Courthouse, going down turning left past Albemarle Police Department headquarters, then coming back on First Street to the courthouse.

Organized in part by local resident Ashley Medley, Saturday’s march saw citizens chanting slogans like “No Justice, No Peace” and the words of the late George Floyd, “I Can’t Breathe.”

Medley said the numbers had tripled since a planned rally for the movement several years ago.

“I’m very impressed. I thank God for it; (we) couldn’t have done it without him,” Medley said. “It makes me feel like as a community we can really come together like we are supposed to. I’ve seen other cities and towns do it and I just want us to come together and support each other.”

“We want to support you,” Dulin said. “We see the injustice going on in our nation. While it may not be happening in Albemarle, our profession is responsible for what is happening in Stanly County.”

Dulin and another police officer helped protect those marching by blocking intersections to allow citizens to safely cross the street. Dulin also provided pizzas for people in the march.

We need you now,” she said to the youth in attendance. “We need your voice now. We need you to get active now. I pray that we don’t let this be because something tragic happens, we come together and do something. We need to start doing positive things now.”

She also said “there used to be constant discussion among ourselves so we get to know each other. A lot of times we do things out of fear. Just because you don’t know me, now you fear me. But if you take the time to get to know me, there’s no fear.”

“We have to stop making this a black thing or a white thing,” she said. “It’s a people thing. It’s a God thing.”

Before the march, someone shouted out, “Where are our political leaders?” to which Albemarle City Councilman Dexter Townsend stepped forward to say he was not at the march as a city councilman or elected official, but as a concerned black man.