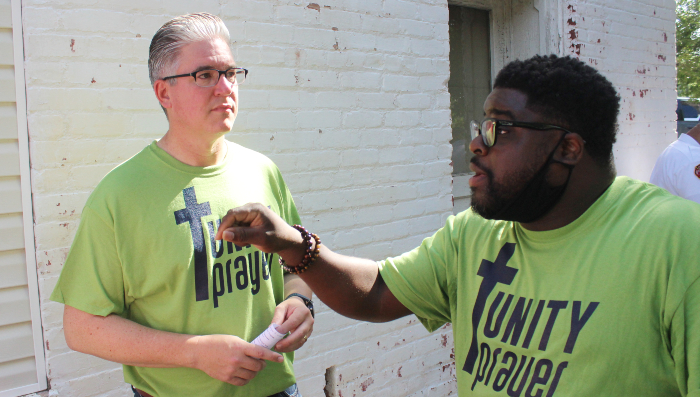 Representatives from various churches in Stanly’s faith-based community met with Albemarle city officials and the public for an outdoor Unity Prayer event Saturday.

The event, organized by New Life Direction Ministries, the Stanly chapter of the NAACP and the United Way of Stanly County, brought together people from all backgrounds to pray together.

Albemarle City Councilman Dexter Townsend said the country is facing a pandemic besides COVID-19: the pandemic of social injustice.

“Any time we deal with that number of cases, we have a serious situation,” Townsend said referring to the number of police brutality claims between 2013-2019 which he said numbered 7,766 cases.

“We can make a difference. We can make change. If you see something locally or globally, you need to report it to the City of Albemarle,” Townsend said, noting the city has in place a system to allow citizens to report police brutality.

“It won’t hurt to report when you see (police) doing something good,” he said.

Matthew McNeil, assistant pastor at New Life Direction Ministries, said things are changing, thanking each church represented at the event. He said the event came as a result of the death of George Floyd in Minnesota.

The slogan for the event, McNeill said, was “One Voice. One Vision. One Victory.”

A number of pastors spoke and led the attendees in prayer, including Mike Stovall of Resurrection Community Church, retired minister James Richardson of Saints Delight Church of Albemarle, Bryan Wright of Boomerang Church and Elizabeth Ayscue of First Presbyterian Church.

Tim Hill, representing Sharp Men Organization, a local nonprofit, spoke as members of the group stood in front of him.

“Today is a good day for confession and repentance. I wish I had heard a lot more of it so far,” Hill said.

He addressed police officers asking for their forgiveness “for once having my hate in my heart for you for how you treated my daddy, my uncles, my brothers, my cousins, my sons.”

Hill said both black and white pastors should be spending more time in the black communities.

“We must go to our schools and check on our babies, hold the principals and teachers responsible, hold them accountable for the way they are teaching our babies,” Hill said. He added children are being made a “menace to society” when they “act up a little bit.”

“I’m coming to fight for these babies,” Hill said pointing to the children standing in front of him. “They will not be mistreated no more.”

“He says, ‘Then, I will hear from heaven,’ after we do first things first,” Scott-Owens said.

Other public officials speaking at the event included Albemarle mayor Ronnie Michael, who started by saying “I want you to know who to hold accountable,” introducing members of the City Council along with City Manager Michael Ferris.

“These are the ones that you should hold accountable; start with us,” Michael said. “What happened in Minnesota was unforgivable. No police officer has ever been trained to do that.”

He added “just because one police officer, or in this case four, do something wrong, don’t put all police officers in the same light.”

Michael thanked the organizers of the Unity Prayer for trying to do what a lot of communities are not doing.

“We’re not out in the streets causing damage. You’re doing it in unity and trying to do it peacefully,” Michael said.

Albemarle Police Chief David Dulin said people did not want to hear about a 51 percent reduction in force used by the city’s officers, or saying every patrol officer has a body camera “they record so that it holds not only the community but the officers responsible.”

What matters right now, he said, was what Hill said about repentance and confession.

“I want to be the first to say that I am sorry for the way some law enforcement officers and agencies have handled racial tensions with their community members,” Dulin said.

While saying he feels APD does a good job of community relations, “we can always do better. There is room for improvement in everything we do.”

“I am sorry it has taken the killing of George Floyd and others for the world to see the persistent inequalities for the color of people. We need to make a change and we are in the right spot today to do it,” Dulin said.

Community meetings have been postponed due to the COVID-19 pandemic, but the meetings will start back up, Dulin said.

“We want to hear what you have to say and make those changes. It starts with us,” Dulin said.

The department “needs a chaplain of color to represent you in everything we do in our agency,” Dulin said.

Fire Chief T. Pierre Bruton said “look around you. You can only see the courage that Albemarle brings out, the one, the unity, one Albemarle.”

“The travesty that has been displayed is unreal, but what we see in the communities out there… in no way shape, form or fashion represent the community we have and the police officers we have that serve this great community,” Bruton said.

“The only way a community and its citizens are going to check themselves and keep themselves in a peaceful opportunity like this is when they see someone acting outside what we are here to represent,” he added. “They need to be checked.”

After the event, McNeill said the response of the community to the event was “overwhelming to be able to see all walks of life join together for one cause, to affect change in our city.”