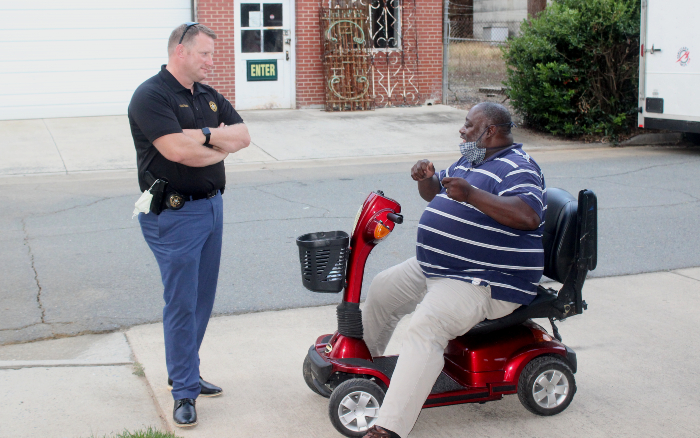 Representatives from the law enforcement community, elected officials and local clergy hosted an open forum on race relations entitled “Bridge the Gap” with the community Thursday at Market Station in Albemarle.

The forum gave citizens the opportunity to voice their opinions to law enforcement officials regarding their experiences and concerns on topics related to race relations.

Perfecting Life Ministries Pastor Brian Johnson was facilitator for the forum. He opened with a quote from the song “We Are The World” which played among others as people gathered.

“We make (the world) a better, brighter place with what? Just you and me,” Johnson said.

The first question asked in general of everyone in attendance was to ask where does racism come from.

Johnson said he believed racism came out of ignorance and fear.

“While our racial relationships may not be perfect here in the city of Albemarle, I believe we are working on it daily though…I don’t want someone else’s problems to become our problems,” Johnson said.

Events like Bridging the Gap are designed to be “safe harbors to where we can have conversation.”

The Rev. Matt Drumheller, co-pastor of First Presbyterian Church in Albemarle, said racism is rooted in a system that favors white people.

“We need to deconstruct the system that favors certain people over others…I hear the need to root out that fear or ignorance,” Drumheller said.

Badin Councilwoman Deloris Chambers said people need to “realize that we are more alike than different.”

In comments from citizens, Mike Edgerton said it is a fact that people do see color.

“Just because you see color, that doesn’t lessen a person. You have to see color and respect whatever color that is,” he said.

Badin resident Anthony Simpson said it was easy for people to come together now in the wake of recent incidents such as the death of Minnesota resident George Floyd under the knew of a police officer, but he asked, “What about after?”

He said he lived in Amhurst and often sees the streets cordoned off or various incidents of police presence as an “every single day thing.”

Simpson added “bad cops make it bad for good cops” and that being courteous to others would go a long way.

Robert Simmons directed a question to the officers present: “What is it about the black man that makes so many policemen fearful?”

He said when police officers are not in uniform and gather with others, they are just another person.

“But whenever a black man is being talked to by the police…the first thing you do is pull out the gun or the taser,” Simmons said.

He said officers have in the past pulled up behind him while driving and “gotten right on my bumper and follow…if I try to go to another lane, the lights come on.”

“The problem with the bad cops is every time we get pulled over by any cop, we’ve got a problem. Our life is at stake,” Simmons said. He said police should spend more time visiting high school students.

T.J. Smith said he spent four years in the Navy on the USS Theodore Roosevelt which helped him develop his cultural awareness. He shared a story of being on the ship one time, turning the corner and seeing five black men, all about 6-foot, 6-inches tall, and thinking at first, “I’m going to die today.”

What happened was those men became some of his best friends, including one person of the Muslim faith and several Southern Baptists from South Georgia.

“Once I got out of the Navy, I didn’t see color. I never understood color and I still don’t understand why I was still dealing with this,” Smith said.

As far as his department and mistreatment of citizens of color, Smith said “we don’t put up with it. If it does (happen), we’ll take care of it accordingly.”

Smith said he believes anyone not having served in the military “does need some type of training” to understand “if a man has dreadlocks, he’s probably not a thug. He’s just another guy.”

Kisha Scott, an assistant district attorney with Stanly County, said she was not there as a DA but as a person who has worked in the community for 12 years. She appreciated the dialogue at the event.

Scott said she had heard the phrase “cultural sensitivity” a few times, “but at the end of the day, we’re all people, and we’re all human. Empathy transcends religion; it transcends culture. It transcends differences in how people look.”

“We’ve got to stop saying Black Lives Matter. God spoke to me yesterday. He said, ‘All lives matter,’ ” Emma Broadway added. “We have some black people who have been mistreated, but guess what? We have some police who have been mistreated. We have to go back to our church, sit our young men and women down and teach them who Jesus is and how we are supposed to act, how we are supposed to treat each other.”

When asked about the amount of training officers get, Crisco said the total time of the program at Stanly Community College is approximately 680 hours, or about three to four months. Most officers are also assigned a field training officer and the training is for 12 to 16 weeks.

Crisco said the state mandates 24 hours of continuing education per year for current officers, but the county requires as much as two and three times the state standard.

The sheriff said he wishes the 680 hours, which is twice what the training used to be 30 years ago, was even more.

Tim Hill, director of the Sharp Man Organization, noted the absence of young black men at Thursday’s event “which says a lot.”

Hill said in his work with young black men, they say when police come into the neighborhood they are coming in to take someone away.

“They come to take. They come to arrest. They don’t see the love from police officers,” Hill said.

He said many young men think police stay on the edge of black neighborhoods “so when they come out, (the police) are going to mess with you…they don’t have any trust for the white people in the community or the officers.”

Hill related a story from the Unity Prayer event last weekend, saying a 70-year-old white lady had a conversation with him afterwards.

“She said her whole life was like running in a field with flowers. It was beautiful. She never had to think about how anybody was going to treat her but with love. I told her I’ve never had a day like that in my life,” Hill said.

After the event, people stayed and spoke at length to each other, which Johnson said “after it’s over is when the meeting really began to take place. Bridging the gap starts just like that.”

Johnson said the event “was an icebreaker” and that “more dialogue needs to happen.”