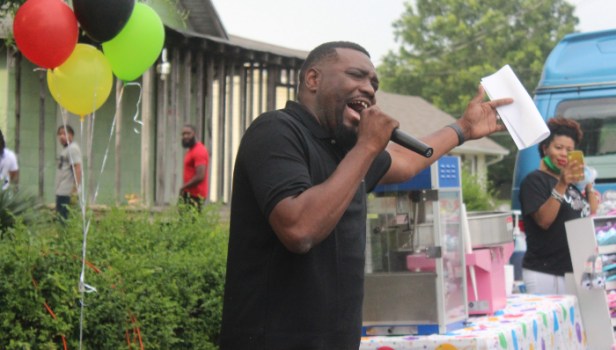 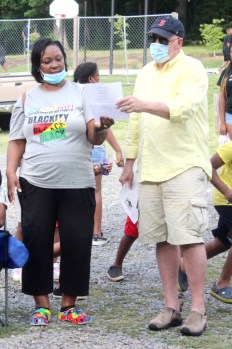 Chemega Peoples (left) and Russ Sharples sing the Black National Anthem, "Lift Every Voice and Sing," at the festival.(Photo by Charles Curcio/staff) 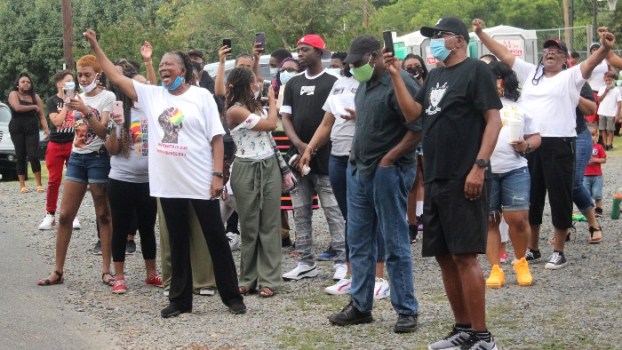 Festival goers at the inaugural Juneteenth celebration cheer for the speakers. (Photo by Charles Curcio/staff)

Music, food, festivities and fun for hundreds of Stanly residents Friday helped mark the 155th anniversary of the last group of slaves who received their freedom June 19, 1865.

The fields next to the basketball courts in the West Badin community were filled at the town’s first Juneteenth festival to celebrate the day.

Free cotton candy, snow cones and other treats were available for kids while people enjoyed dinner and socializing into the evening.

Citizens from across Stanly and beyond filled the streets of the community with a peaceful celebration of the day many refer to as Freedom Day or Emancipation Day.

On that day, Gen. Gordon Granger and 2,000 Union soldiers freed 250,000 slaves in Texas after having traveled from Appomattox Court House in Virginia, where the Civil War ended two months prior.

T-shirts worn by attendees of the event celebrated the “Black Lives Matter” movement while a program of speakers shared information about the holiday.

Vonisha Gramling, one of the organizers of the event, said it was a very emotional holiday for her with what was going on in the world.

“A lot are out to learn about what Juneteenth is, about our ancestors, when everyone was set free. It’s a festival, a celebration,” Gramling said.

The Rev. Joshua Ellerbe said the United States started as 13 states and “as a place where we’re supposed to be one (and) everybody should be treated equally.”

“Some people say the best thing to do is not talk about it,” but, he said, if people don’t “you’ll never do anything about it.”

Noting some in the crowd lived in a time when it was legal for black people to be discriminated against because of the color of the skin, Ellerbe addressed those who believe racism does not exist in America.

He spoke of the Affordable Housing Act, passed in 1968 two weeks before Dr. Martin Luther King Jr. was assassinated.

“The issues that we have still stem from issues we had that were not that long ago. When we talk about the division of America…we must first admit that we’ve had a problem and we must admit that those problems still exist,” Ellerbe said.

“We have more opportunities today than what we’ve ever had…because of our forefathers, because of those that were for social justice and equality.”

He asked people in attendance, “Have we freed ourselves in our mind to the point where if there is somebody that still thinks a certain way about me, because of the melanin in my skin, do I allow that to persuade me to think the same?

“You have to take it upon yourself to understand that the life God granted you, if you take hold of the responsibility to live it to the best of your ability, that you can make your proclamation to be free. We matter.”

“Our greatest fear is is not that we are inadequate, but that we are powerful beyond measure,” the poem read.

“We were born to make manifest the glory of God within us…(when) we let our own light shine we unconsciously give others permission to do the same,” she said. “As we are liberated from our fear, our presence automatically liberates others.”

Edgerton said the Declaration of Independence guarantees “life, liberty and the pursuit of happiness.”

“Safety in our happiness. We don’t see that yet, but it’s coming,” she said.

She spoke about Watch Night, a holiday observed by black churches on Dec. 31 which celebrates the Emancipation Proclamation, which went into effect Jan. 1, 1863.

“They were watching, waiting for the Emancipation Proclamation to come forward so that we could be free,” Edgerton said. “It was a day of jubilee.”

The Civil War lasted until April 1865, almost 2.5 years after the Emancipation Proclamation.

“We were still enslaved,” she said. “Some of us didn’t know that we were free.”

She said slave owners “were trying to put them back into bondage. Some of the slaves were so afraid,” using the allegory of the cave, “because they kept seeing all these scary things out there that they couldn’t see. They were scared to move so they stayed.”

“Abraham Lincoln’s ultimate goal was economy,” she said. “You are a valuable people. Do you know how valuable you are?”

She said many freed slaves fought in the Civil War for the Union and “fought so hard because they were fighting for their freedom…knowing if they lost they were going back into slavery.”

One group of slaves, Edgerton said, built their own community in Tulsa, Okla.

“You can’t get us down. We are proud people, valuable people. We have ties that bind us, hold us together, won’t let us back down,” Edgerton said.

If civil rights leaders like King, Malcolm X and Rosa Parks were to come back today, Edgerton said she believed they would do it all over again and say, “Your freedom was worth anything we had to give you.”

Note: For pictures from the event, please visit the following link: ( https://photos.thesnaponline.com/Inaugural-Badin-Juneteenth-Celebration/i-vPmhSwD )