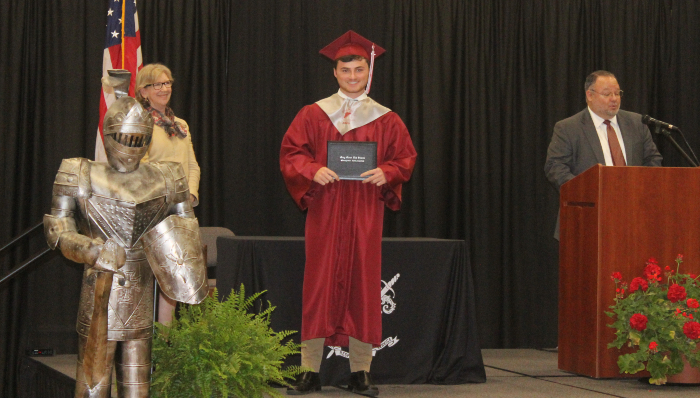 Traditionally, not every graduate of a high school gets the chance to deliver a speech to family and teachers.

In the case of Gray Stone Day School’s Class of 2020, every graduating senior got the chance to do just that.

With COVID-19 having canceled many group gatherings, officials at the school decided to have individual graduation ceremonies.

Each graduate was afforded the opportunity to walk down the aisle into the main gymnasium to “Pomp and Circumstance” with up to six members of their family attending.

Gray Stone Chief Administrative Officer Helen Nance, along with Head of School Jeff Morris, gave brief speeches to grads and their families. Seniors were allowed to say a few words as well. Each ceremony was scheduled to last around 12 minutes.

Video cameras captured each graduate’s entry and diploma presentation, which grads picked up off a table instead of the tradition of being presented by an administrator. Grads then turned their tassels around and threw their cap in the air if they chose to do so.

Eventually, each graduate’s entrance and diploma ceremonies will be put together into one video which will be available for families.

In her comments to students, Nance said she thought the Class of 2005, the first Gray Stone graduating class, had the most challenging time since “those students came in the 10th grade to a school that only existed on paper.”

At that time, Pfeiffer’s Harris Building housed the schools while the Knights’ athletic teams did not have their own gym or playing fields.

Nance said this year’s grads had to deal with many changes, from the addition of a middle school to the COVID-19 pandemic.

“With this experience comes the knowledge that you can face anything in the future with strength, flexibility and courage, no matter what you encounter,” Nance said.

The biggest challenge, she said, was coping with disappointment.

“It takes most people years to learn how to handle life when it doesn’t go the way they planned.”

Listing the accomplishments of this year’s graduating class, Nance said the 95 graduates from six counties received more than $2 million in college scholarships. Nearly 100 percent of the class will attend college in the fall.

Senior projects, a requirement for graduation, encompassed more than 5,400 hours of community service.

Morris said students chose “a place that would encourage you to think in news ways.” He said some might say “you chose a life of sacrifice as you gave up old friends, football games and weekends to get your work done for those demanding teachers.”

Morris said Gray Stone “is hard” and “sets high expectations for student work.” He said he was sure students felt they had succeeded at some times and survived other times.

“You are resilient. You are engaging. You are inquisitive…you have a bright future filled with possibilities.”

Josh Gill, one student who graduated Friday, said having his own ceremony “was really cool” considering the coronavirus situation.

“It was pretty neat to have a more centralized and personalized kind of graduation where it’s just your family and (the speakers) were specifically talking to you,” Gill said.

Gill, who plans to go to Stanly Community College before transferring to UNC-Charlotte, said he did not know what to expect from the ceremony going in.

“You were the whole star of the show,” he said.

During her speech, graduate Brooke Seavey said the Class of 2020 “has a unique bond.” She and her classmates have come closer while being “definitely prepared for college.”

She later said it was kind of awkward and also sad to graduate alone, but she was able to give her own comments on what has happened to her this year.

Seavey said it was nice to speak to family directly in the ceremony, but she wished she could have had a normal graduation experience.

With her future plans starting at Appalachian State University, Seavey has not picked a major but said she will minor in dance after studying at Melissa Kathleen’s School of Dance in Albemarle.

With the unique graduation and the last few months at home with the pandemic, Seavey said she has learned some lessons.

“I used to take church and school for granted…it’s really helped me to know that I’m not guaranteed everything, but to value everything.”