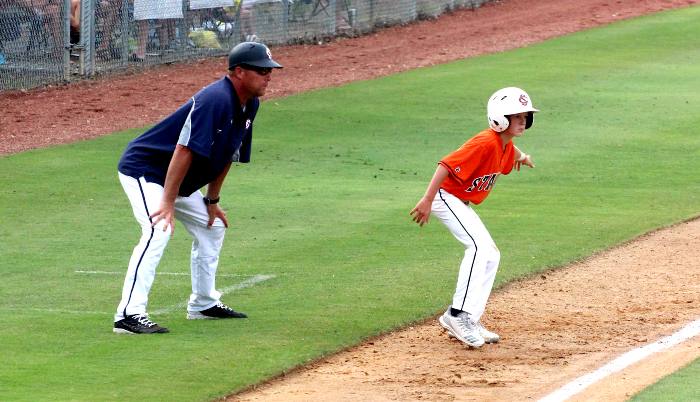 Bryson Speights leads off third base as Stanly's manager of the NC3 junior team, Chad Yow, looks on from the third base coaching box. (Photo by Charles Curcio/staff)

The last time a crack of the bat was heard in a game at West Stanly was March 13, an unlucky Friday for sports fans.

With a COVID-19 pandemic forcing the shutdown of sports, high school-age play was on hold for 101 days until Tuesday night.

The Stanly County NC 3 junior team kicked off the summer season at The Ball Park at West Stanly in an 11-4 loss to Wheatmore.

Social distancing practices limited fans’ access in the stands, which was cut off at 25 people. Fans not able to sit in the stands sat in chairs in groups down the third-base line and behind the left-field fence.

Chad Yow, manager of the Stanly juniors, said it was refreshing to be back out on the baseball field.

“Our round of pregame infield/outfield got me feeling like a child again,” Yow said. “After unwinding in the clubhouse after the game, things felt surreal. It was so nice to see boys back on the field playing ball again. I think it was a special day for Stanly County.”

The Stanly skipper said the players seem to have a mixture of emotions about playing again, something between the excitement of playing and the reality of being a while since having played.

In the game, Stanly took a 2-0 lead in the third, but Wheatmore responded with seven runs over the next three innings. Jaxon Tucker led Stanly with two RBIs on a single in the third.

Both teams used a lot of arms on the mound. Stanly sent 10 to the mound in the nine-inning game. Six of Wheatmore’s 11 runs were earned while Stanly issued 16 walks in the loss.

The team was scheduled to play Thursday at home against Statesville.