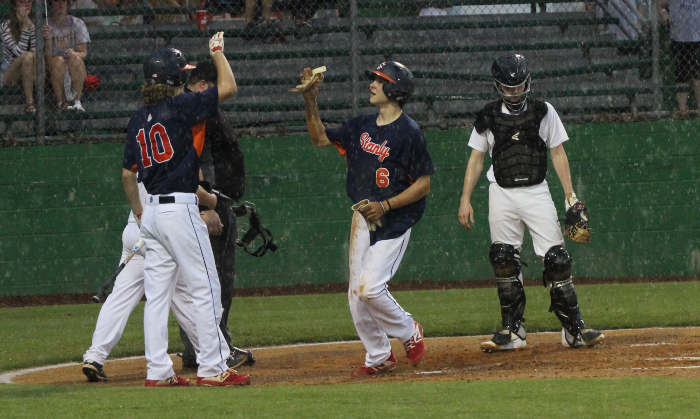 Jaxon Buck (right) high-fives Sawyer Smith after scoring in the bottom of the first of Wednesday's game. (Photo by Charles Curcio/staff)

Twenty-four hours after baseball returned to Stanly County with the NC3 juniors, the senior squad got their chance to play.

Until something other than COVID-19 said no.

Thunderstorms rolling through Stanly Wednesday night caused a rainout spoiling the seniors’ home opener after the hosts jumped out to an early 1-0 lead.

Rain began to fall in the bottom of the first inning when an errant throw allowed Stanly to score. After the inning concluded, the field was cleared due to heavy rains which eventually forced the game to be postponed.

No make up time or day has been announced.

Stanly will return home Monday night for a league game against Greensboro.

In accordance with COVID-19 restrictions announced Wednesday by North Carolina Gov. Roy Cooper, a total of 25 people will be allowed to sit in the stands.