Jeanette Vaughn was influenced by her sisters to go into nursing.

That influence and a desire to help people led Vaughn to train others in the field.

Vaughn, who was the first family nurse practitioner in Stanly County, died June 3 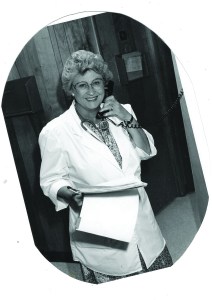 Jeanette Vaughn was the county’s first nurse practitioner. She died June 3 at age 79.

Natalie Burris said her mom may have been proud of being the first, but it was not something she bragged about.

“I do think that it did inspire a lot of other nurses to do the same,” Burris said.

Dr. John Gaskin, for whom Vaughn was working, pushed her into going to the University of North Carolina at Chapel Hill for her training.

“She just had a great love of seeing how her sisters worked and hearing their stories and the ups and downs of it and she decided to go to school,” Burris said.

After graduation, Vaughn served as a nurse practitioner from 1972 to 2000, working mostly with Gaskin in Albemarle and West Stanly Medical Services before leaving to form Locust Medical Services shortly before her retirement.

“They didn’t have a receptionist or secretary. She was his nurse and she ran the front desk there,” Burris said of her mom’s early years.

Burris said her mom would sometimes see up to 80 patients in a day.

“She would bust her tail,” Burris said. “She was very accurate, very thorough. She did a thorough examine before she would address the problem.

Kristi Small, a physician’s assistant with Central Carolina Medical Associates in Albemarle, said her first job out of medical school was with Vaughn in Locust, where she stayed for about two years.

“I learned a lot from her and she was wonderful to share knowledge with me when I needed help,” said Small, one of the first two physician’s assistants in the county.

“Her patients definitely thought a lot of her,” Small added. “I thought an awful lot of her and appreciated her with all she helped me with when I was first starting out.”

Vaughn’s daughter also became a medical assistant and worked with her mom and Gaskin.

“She had a love and passion for her work,” Burris said. “She deeply cared about her patients.”