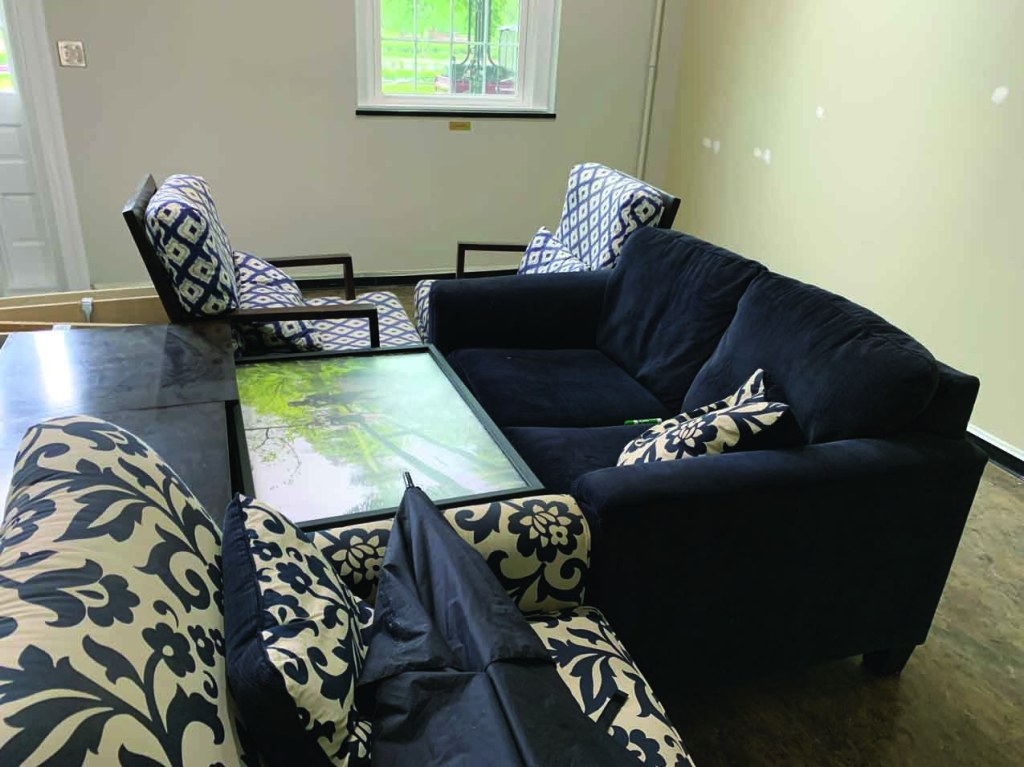 New furniture for the entryway of Harris Hall at Pfeiffer University in Misenheimer. (Photo by CHARLES CURCIO)

The COVID-19 pandemic has caused many changes in the halls of higher education with colleges and universities moving to online instruction.

One industry which has continued has been construction and renovations of buildings, which includes Pfeiffer University.

Along with the construction in downtown Albemarle of the new building for the physician’s assistant and occupational therapy programs, Pfeiffer’s main science and math building on the Misenheimer campus has undergone renovations.

Harris Hall, the first building for education classes built on the same side of the school’s campus as the dorms, student center and library, will look completely different to students returning for classes in the fall 2020 semester.

Pfeiffer President Scott Bullard noted the school had a 94.8 percent retention rate from the fall to spring semester last academic year, up from 90 to 91 percent from the previous year.

“What that tells me is our faculty…continues to be incredibly engaged. They know our students’ names; they know their vocational aspirations,” Bullard said. “If you add to that spirit of engagement first-class facilities, the sky’s the limit for us.”

A new lobby space has been added right inside the main entrance. Motion-sensor lights have been installed throughout the building.

Stokes Construction, who originally built the building in 1958, is in charge of the renovations.

Two new classrooms were added to the main floor which also houses the lecture hall. One of those classrooms has a door directly into the Steve Dial Greenhouse, allowing students to be able to enter the greenhouse without going outside.

Bullard said strengthening the exercise lab along with the additions for the biology, chemistry and physics departments “creates a synergy which is good for the whole university.”

The bottom floor also has an exercise science classroom, which will tie into the new building in Albemarle. Those wishing to earn a master’s degree in occupational therapy or the physician’s assistant program can move seamlessly from the Misenheimer campus to the program in downtown Albemarle.

Both the renovations of Harris and construction of the new building, Bullard said, should be completed around mid-July, allowing staff to move equipment in and be ready for the fall 2020 semester.

Note: For more on the OT program and accreditation, click on the following link: (https://www.thesnaponline.com/2020/05/28/pfeiffer-occupational-therapy-masters-program-receives-new-accreditation-status/)

Many of the biggest changes have been made to the third floor, including a glassed-in conference room, teaching space and a new elevator.

A nursing student lounge has been added to the top floor with a computer bar to allow students to charge laptops and other accessories. New office space also has been built on the top floor with rooms which may also become quiet study rooms students could be able to reserve.

Note: For a guided tour of the Harris Hall renovations, here is sa link to a video produced by Pfeiffer hosted by President Bullard. ( https://www.youtube.com/watch?v=59UmQ9Ty1t8 )