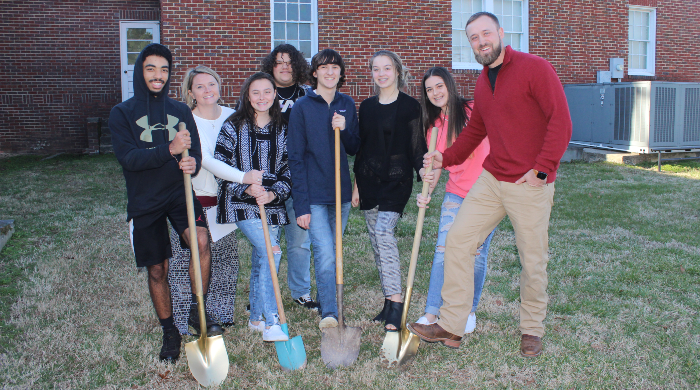 Members of IMPACT Youth take part in a recent groundbreaking at Richfield United Methodist Church for the remodeling of the group's meeting space. (Photo by Charles Curcio)

A new partnership between one Richfield church with an older population and a local youth group looks to bridge the generation gap while assisting the community in 2020 and beyond.

Rick Clough, head minister at Richfield United Methodist Church, and members of the church hosted a groundbreaking ceremony recently to announce renovations to the facilities’ fellowship hall in order to give IMPACT, a local youth group, a better home for its activities.

Phase One of the changes began in the basement of the hall which will become the new home for IMPACT (Impacting My Peers As Christian Teens). The group is comprised of around 30 teenagers from around the community representing various denominations as well as youth who are not members of a church.

Renovations have come about in part with a partnership with Crossroads Connections, a community-based organization comprising Richfield UMC and other churches from northern Stanly, northeastern Cabarrus and southern Rowan counties.

Clough said several years ago Richfield UMC was close to closing before district superintendent Laura Auten had the idea for the facility to remission itself.

Taking a leap of faith, Clough said, the church decided the second phase of the changes would be to remodel the ground-level floor of the fellowship hall to provide a five-day-a-week feeding site for Stanly Community Christian Ministry.

“(SCCM) has a person to run it. They are waiting for us to renovate it. We wanted to do Phase One to make sure the building was structurally sound,” Clough said. “It’s a way of taking this building and using it for something…we have no delusions, but a lot of dreams.”

The renovations to the building in Phase One have included shoring up the walls to ensuring they are secure, with the basement having some water and drainage problems. A small kitchen and restroom for IMPACT in the basement will be put in along with a handicap lift on the outside entrance, along with some painting and sprucing up of the outside area.

The second phase, which would facilitate SCCM’s food program, requires the upper floor having lockable pantry, according to Jennifer Orr, director of Crossroads Connections.

Adding wheelchair ramps and making one of the bathrooms handicapped-accessible will also be needed, along with adding a dishwasher, exhaust hoods, electrical and HVAC work in the kitchen area.

Richfield UMC, with an average attendance of around 10 people on Sunday, wanted as a congregation to do something positive for the community with part of its building which was not getting utilized very much, according to the minister.

“(The congregation) is passionate about doing something for their legacy that will make a difference in their community,” Clough said.

Members of the church, Clough said, were elderly but had a desire to go out with honor in using the facility the best way they can.

“That’s what being part of Crossroads is all about,” Clough said.

Orr said Crossroads assists others with food, educational, health and relational support in the area, of which IMPACT is part of its network.

An ordained Methodist minister, Orr works with Crossroads as her appointment with the church. She expressed her excitement regarding the renovations for the building.

Funding for the renovations will primarily come from grants as well as angel donors, people in the community donating money towards the project.

“This church has given an awful lot for this phase,” Clough said. “I don’t know what the future of the church (will be), but this will be a community building.”

Additional changes to the building may come as well, including incorporating some of the rooms attached to the fellowship hall. Clough said anything further would have to happen after things open from the current pandemic.