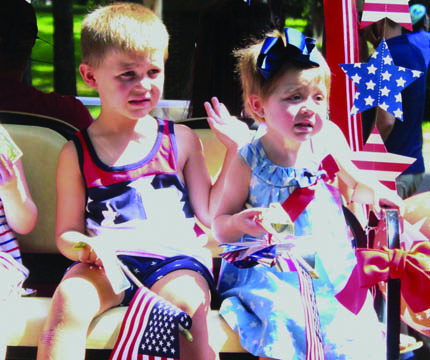 Good news recently came to one Albemarle family who has been fighting the battle against pediatric cancer.

Brinn Andrew, who was diagnosed in December 2018 with Stage 3 neuroblastoma, recently completed her treatments and was able to go back to day care after being diagnosed as having no evidence of disease or cancer.

Her mother, Kellie, said she and her family “knew it was going to be an 18-month journey.”

However, her mother said, to be at the point now where Brinn’s cancer is in remission is “absolutely incredible. She’s doing so well.”

Regarding being back in day care, her mother said Brinn “is loving life and her new friends.”

Kellie said the support of the community has been great since the first day back in 2018.

“Now that we’re ending treatment, we have a lot of people just come out and continue to show their support, sending cards and being so prayerful.”

Adjusting to a new normal, Kellie said it is things like being able to sit down for dinner together as a family with everyone feeling good enough to eat is joyful.

“We try to enjoy every second of it, even the most mundane things, we really understand how important and special they can be,” Kellie said.

Kellie said her daughter’s perseverance and desire to be better without even really knowing what was going on “was really incredible to watch. She’s just tough as nails, took everything on and didn’t look back.”

Posts on social media showed the family this week enjoying a vacation at the beach together.

Along with Brinn, Kellie and Jason Andrew have an older son, Nash.