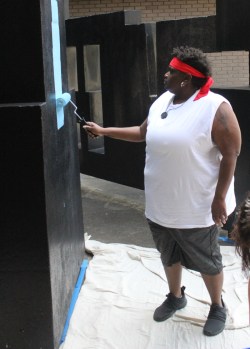 Kyoko Rorie-Burton paints one of the sculptures at the Stanly County Public Library. (Photo by Charles Curcio/staff) 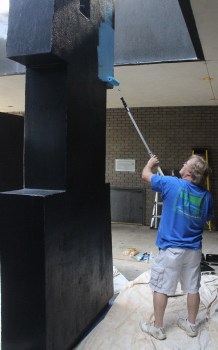 Glen Alford paints one of the larger sculptures in the atrium of the main branch of the Stanly County Public Library. (Photo by Charles Curcio/staff) 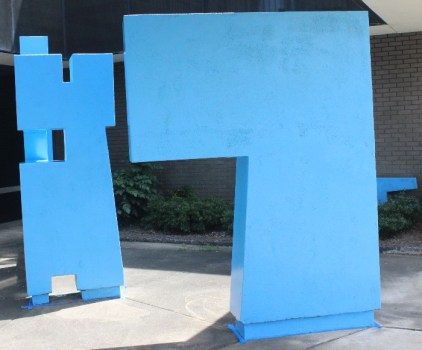 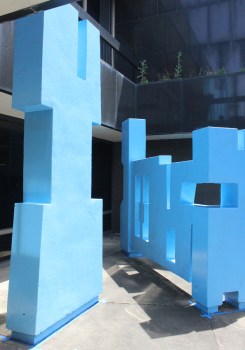 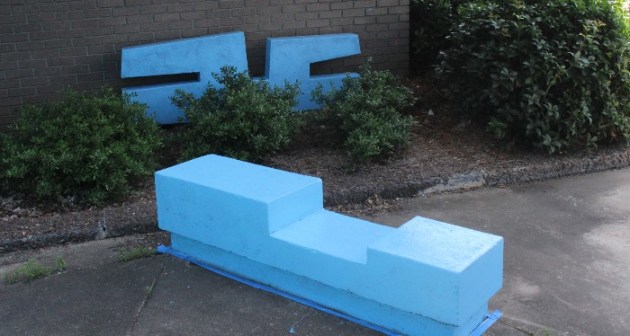 With many downtown areas across the country looking to add more outdoor art displays, one hiding in plain sight in Albemarle recently got a facelift.

At the main branch of the Stanly County Public Library, some pieces of abstract art returned to their original color through some volunteer help.

Joy Almond, director of the Albemarle Downtown Development Corporation (ADDC), said she had recently discovered the artist who constructed the pieces.

The sculptures were originally placed at what was the main entrance to the library branch, whereas today a ramp leads up to the main floor of the library where the shelves are located.

The artist who constructed the art project was George Bireline, a professor emeritus of design at N.C. State University. The Peoria, Ill. native graduated from UNC-Chapel Hill in 1963. He received a Guggenheim Fellowship in 1967 and had a retrospective of his work featured at the North Carolina Museum of Art 11 years later.

Bireline’s work in abstract impressionism and color-field painting, along with the library, can be found in permanent collections at the Mint Museum in Charlotte, the  Hirshhorn Museum and Sculpture Garden in Washington, D.C. and the Virginia Museum of Fine Arts in Richmond, as well as the Ackland Museum of Art in Chapel Hill.

Almond said she had recently discovered the name who made the display and said, “Why are we not showcasing that?”

“Art enthusiasts might want to travel out here to see it,” she said.

Melanie Hollis, director of the library, is also the board chairman for the ADDC. Almond said the group “has brainstormed on a lot of projects.”

Almond said the library supplied some materials and the ADDC called out for volunteers. Around 10 people dove in with rollers to return the sculptures to their original color of blue, just slightly darker than Carolina blue.

According to documents from the Stanly County History Center, the statues were originally painted blue on the sides and black in the middle portions, but had been painted over in black in early 1994. Some of the sculptures have lights, but they are not functional at this time.

Holles said the project has been “something we’ve been talking about doing for years here at the library.” She said refurbishing the sculptures “gives them some more interest so people can see that they are there. So many people when they drive by don’t even know they are there.”

Kyoko Rorie-Burton said she volunteered because she wanted to donate her time and energy to the community she grew up in.

The project also appealed to her because of her passion for art as the creative arts director for GHA Autism Supports. Rorie-Burton said individuals from GHA come to the library on a regular basis.

“A library provides opportunities for them to come out and do things here. I thought it would be important for myself to participate in this for myself personally and for work,” Rorie-Burton said.