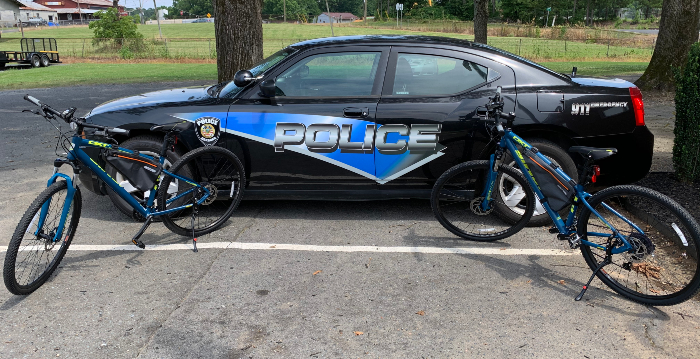 These two 10-speed bikes were donated to the Oakboro Police Department by the non-profit organization First Responders 1st. (Contributed)

Residents of Oakboro will soon be seeing a new outreach by its police department.

Instead of four-wheeled vehicles, these officers will only need two wheels.

A recent contribution by a charitable organization provided two new 10-speed bikes for the town’s police to use on community patrols.

The bikes were donated by First Responders 1 (FR1), a non-profit ministry whose stated purpose on its website is “to provide emotional support for those who are on the front lines serving and protecting our communities” like fire, police and rescue squads.

Lonnie Clouse, a minister who worked for 17 years with NASCAR’s Motor Racing Outreach, has also worked as a volunteer chaplain for the Charlotte-Mecklenburg Police Department.

Living in Concord, Clouse also works with the Concord Police Department as well as volunteers with the Billy Graham Rapid Response Team.

“(Bikes) are a big help for community policing to show officers are approachable. They pedal through neighborhoods and are able to spend time with people,” Clouse said. “(Officers) are loving, caring, giving, exceptional people that are out there to protect and serve the community.”

Purchased from Excite Bikes in Locust at a discount and outfitted by the bike shop, the two bikes were recently delivered to the police department.

“We’re excited about the new bicycles,” Smith said. “These will be great for our community efforts; (it) makes officers more approachable. They will also be used for functions such as the cruise-in and the July 4th festivities.”

Smith added the bicycles will make it “easier for officers to maneuver through dense areas.”

The chief thanked FR1 for the donation, adding Clouse “has ridden with all of our officers and has shown amazing interest in our officers’ personal and mental health.”