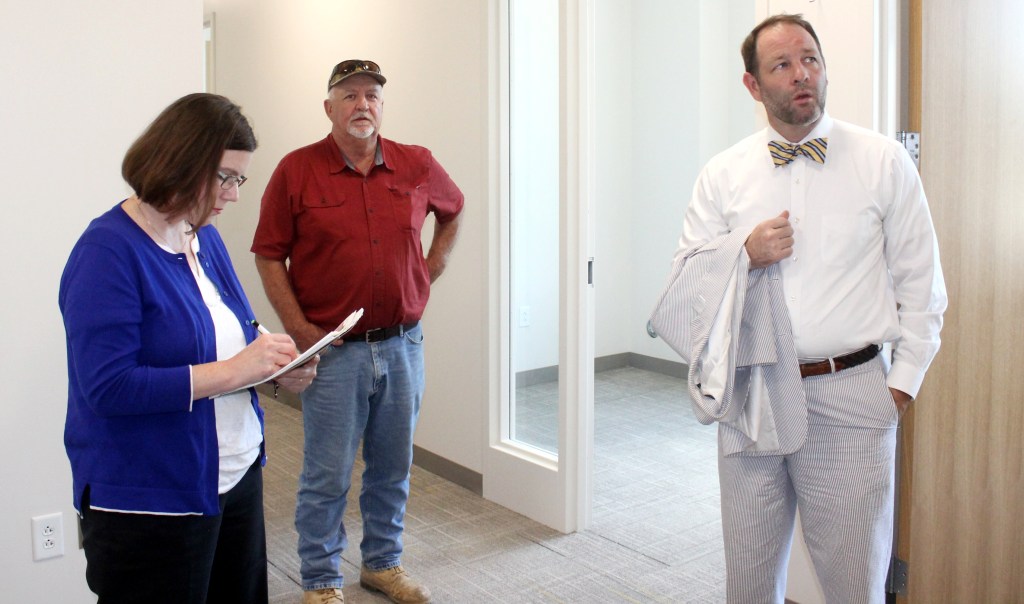 The skyline of downtown Albemarle has a new addition to its profile which is scheduled to open for business in the fall.

Stokes Construction Company has built a one-way road which allows students and staff to enter on the Main Street side and drive around the building for angled parking. The road comes out on Third Street.

A new retaining wall was built around the back part of the lot to protect the new one-way lane.

The ground floor of the building will house labs simulating an emergency room and in-patient rooms along with a simulated doctor’s office exam rooms around the hall.

One corner of the building is nearly all glass across all four floors, including a library and reference room on the top floor. P.A. students will study in a cadaver lab on the fourth floor and be able to watch a teacher work using closed-circuit television from a special teacher’s area adjacent to the lab.

The occupational therapy’s main laboratory will be on the second floor with a replica apartment complete with kitchen and bathroom to give O.T. students a place to work on helping people learn daily activities.

Students, faculty and staff will be able to access the building via a keycard security system.

Dr. Scott Bullard, president of Pfeiffer University, said the new structure will be open in time for the fall semester of studies.

“(Stokes Construction) has instilled a great deal of confidence in me,” Bullard said, noting the progress he sees touring the building about once a week is stunning.

During a recent meeting of the Stanly County Economic Development Council, concerns were raised to Bullard about the new building’s impact on downtown Albemarle in terms of housing and parking.

Bullard said the school “will start small in the fall” with around 10 or 20 employees and 60 students, but those numbers are expected to increase. The president said he believes enrollment will increase by about 30 students per semester until the program eventually peaks at 270 students.

Some parking has been added on Third Street and parking will also be available around the building.

As far as housing goes, Bullard noted several students commuting to Pfeiffer currently are renting houses on Third Street and will be within walking distance to the new building.

Sharing a story about his first year at Duke while earning his master’s degree, Bullard said he commuted to school his first year but his grades improved when he moved closer to campus.

“We’re encouraging these young people to live here, to not commute which really wastes an hour of your day depending on where you’re going,” Bullard said. “We just are excited about having a robust group of people having vibrant intellectual discussions in local coffee shops and living and serving in local health-related clinics.”

Bullard said Pfeiffer “invites investors to ponder ways in which they can positively impact the economy by investing in the area for our students.”

The president also said he wanted to make clear as much as Pfeiffer is investing in Albemarle, the city has already invested much in Pfeiffer.

In the application process, students are asked about rural healthcare and have to write a “substantive reflection” on the topic and why they are interested in studying healthcare before they are approved for the programs.

“We don’t make any bones about the fact students can have a strong academic record, but can’t be articulate about reasons for investing in rural healthcare,” Bullard said.

Albemarle City Councilman Chris Bramlett talked about the creation of an academic village around the new Pfeiffer building in the downtown area. He hopes to have a situation similar to Davidson College

“Having those students downtown is going to turn us into a city that was once a bustling textile manufacturing town into a new era in which our persona is going to be that of an academic village,” Bramlett said. “We will have hundreds of students downtown and all of the accoutrements that go along with it.”