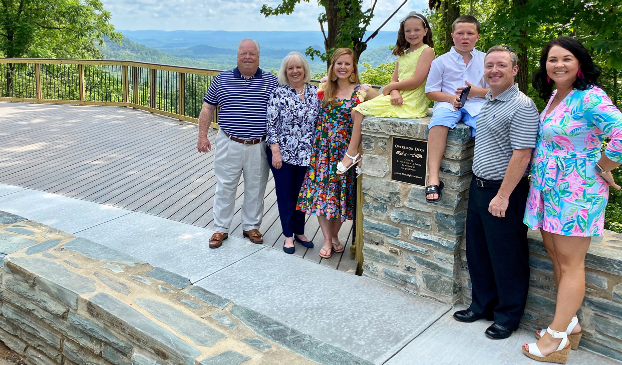 Visitors to Morrow Mountain State Park will be able to enjoy the view from the top of the mountain with the opening of a new deck.

State inspections last week allowed usage of a deck funded completely by the Friends of Morrow Mountain nonprofit organization along with a donation of decking materials from New London manufacturing plant Fiberon.

Tom Rabe Jr. contributed the funds through the Friends of Morrow Mountain for the construction, which was handled all with Stanly-based companies.

Rocks for the argillite rock wall were recycled from the restrooms which previously existed on top of the mountain. New restrooms were added several years ago.

A plaque at the new overlook deck was dedicated to Rabe’s grandfather, park creator John McKnight Morrow, who founded what is now the third-oldest state park in North Carolina.

Vanessa Mullinix, chairwoman of the Friends of Morrow Mountain, said this project came about from Rabe’s wishes to honor his grandfather.

“Tom is getting towards the end of his life. He has been successful in his life…(Rabe) wanted something that a lot of people would use and see,” Mullinix said. “Friends of Morrow Mountain funded the complete project…through a gift from Tom.”

Plans for a new deck had existed since 2014, but the money was not available for construction until Rabe’s donation for the 1,000-square-foot deck.

The lengthy process took place because the wording for the project had to be exactly right in order for a plaque to be placed at the new overlook.

On the deck, the plaque reads, “Given by C. Tom Rabe and Family in memory of his grandfather, James McKnight Morrow.”

Because of social distancing guidelines, a private dedication ceremony was conducted Thursday. The deck is open for use. Mullinix said a larger grand opening ceremony would take place later.