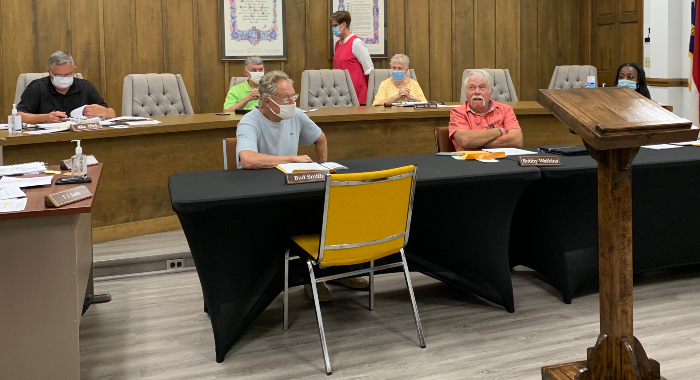 How and where food trucks can set up in the town of Oakboro was discussed Monday night at the meeting of the town’s council.

During the advisory board/code enforcement report from Commissioner Mike Efird, food trucks, he noted, fall under the classification of an itinerant business.

Any peddler or itinerant business, he said, can’t be located within 20 feet of a public right-of-way or intersection, nor can one be set up 20 feet or less near a building, structure, licensed or adjoining property.

Also, food trucks can’t be with 300 feet of any business establishment which offers as a main feature similar items or products for sale. Trucks can also not be 300 feet within a public park. Efird said trucks also can’t obstruct sidewalks, avenues or alleys.

An owner of a food truck himself, Efird said he does not bring his downtown and set it up in parking places or sidewalks. He added food trucks are “actually hurting” local restaurants in terms of lost sales.

Oakboro Police Chief T.J. Smith noted some food trucks were on the streets during the recent Fourth of July caravan. He said they were parked right on the road. He added he was fearful a driver could swerve over and hit the trucks.

“Maybe we can designate an area for (trucks) that meet those requirements,” Smith said.

Commissioner Bud Smith asked if there was a place big enough to host food trucks, to which Chief Smith said he did not know.

The What-a-Burger Food Truck, based out of Mount Pleasant, is an example Commissioner Smith used for one truck regularly coming to town. He asked if they were in violation of ordinances when parked in front of Los Jacubes Mexican Restaurant. Efird said that the truck would be in violation.

“It is a safety hazard that we have inquired and talked about,” Chief Smith said.

Commissioner Chris Huneycutt said one place would be behind the fire department, but asked who would assume insurance liability in that case.

Chief Smith said Efird and himself would get together and try to find a few places where the trucks could legally operate to present to the board at a meeting in the future.