PEEKING INTO THE PAST: Coca-Cola Bottler Part 2 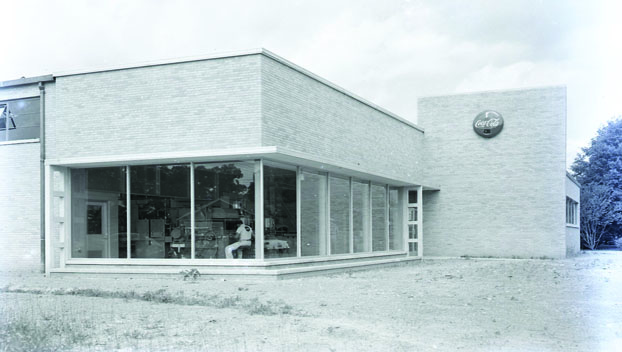 In 1955, the Albemarle Coca-Cola bottling plant was moved to a new building in East Albemarle (above).

During the late 1910s or early 1920s, Stanly Bottling Works relocated to South Street across from the Lutheran Church.

According to newspaper accounts, the business was frequently investing in new and better equipment. The line up of drinks bottled at the plant now included Hire’s Root Beer and “Bevo” that was touted to be “superior to beer.”

In early 1932, the Charlotte company took a controlling stake in the local company and the name was changed to Albemarle Coca-Cola Bottling Company. Local employees, led by P.O. Skidmore and several of his sons, maintained the daily operations.

In 1955, the Albemarle bottling plant was moved to a new building in East Albemarle (today’s photo).

According to city directories the plant was shut down about 2001. The building is now the home of Albemarle Fire Station No. 1.

For part 1 of this series, visit https://www.thesnaponline.com/2020/07/19/peeking-into-the-past-coca-cola-bottler-part-1/