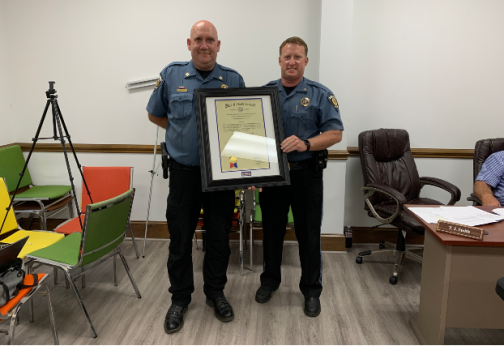 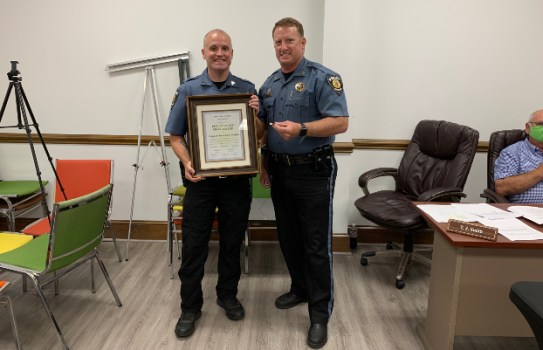 The Oakboro Police Department honored two of its own officers at the July 20 meeting of the town council.

Presented by Police Chief T.J. Smith, the award is given by Oakboro PD to an officer “for a successful effort in saving a human life that involved exceptional courage or performance.”

“We are extremely proud of (Sgt. Eschert) for not only this award, but everything he does to contribute to our department,” Smith said.

On three occasions, Eschert found a victim of an overdose and administered NARCAN to bring those people back to life.

Joining the force at Oakboro after having served in Concord, Smith said Eschert “has stood by me with community relations by acquiring resources to help” such as heaters, book bags and school supplies.

The other award was presented to Oakboro Police Capt. Craig E. Richards, who has served the department for 16 years.

Richards was presented an advanced law enforcement certificate for having recently completed a minimum of 960 training hours.

“I can’t tell you how hard this is,” Smith said.

He was the second officer in Oakboro’s police department to obtain this certification.

“(Richards) has been by my side our entire career,” Smith said, noting they have worked together the past four years and with different departments previously.

“We’ve experienced a lot together…we are extremely proud of everything my good friend has done for the town of Oakboro,” Smith said

Two other officers are expected to obtain the same certification later this year, according to Smith.