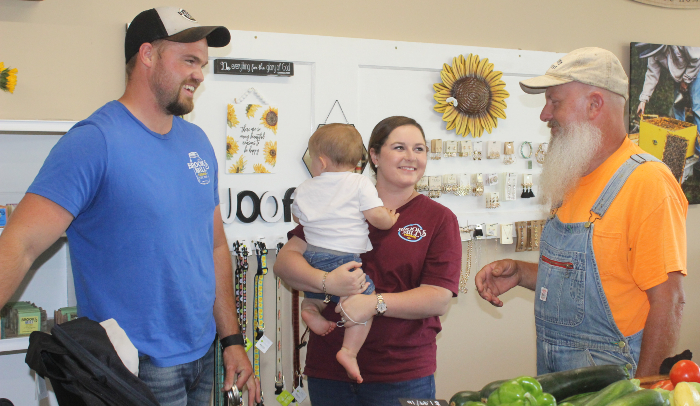 Featuring locally-made products has become a movement among many shop owners, but one new general store features many of Stanly’s finest.

Brooks Mill Farms in Locust has been producing honey products made from its own apiary. The farm, whose roots were just across the border in Cabarrus County, has opened a new general store featuring many Stanly products.

The new store, on N.C. Highway 24-27 in Midland seven miles from Locust, features the farm’s honey along with honey-based personal products (soaps and lotions) and candles.

Owners Clint and Kasey Brooks, though, have expanded shelves to offer far more, including coffee roasted by REL Coffee in Locust.

In fact, an entire corner of the store features the sweet delights of the Albemarle Sweet Shop, including cream horns, fruit bars and more, along with fresh coffee.

“Local business means everything to us. It’s who we are; it’s how we started,” Kasey said about featuring local products.

She said it was the support of the community which made Brooks Mill Farms and she hopes to be a source for other local businesses.

“Local means so much more than just business. It’s family; It’s what provides sustainability for families. There’s so much heart and soul that gets put into (local products) that until you do it as a local entrepreneur you just do not understand.”

Produce like cantaloupes and watermelons raised by Clint’s brother Cody and sister-in-law Caela are offered along with peaches grown in Millingport by Peachberry Farms. Fresh tomatoes, bell peppers, potatoes, fresh corn and other vegetables are also sold.

The Roots Of Success

The history of Brooks Mill Farms goes back to the 1920s and Clint’s great-grandfather, Brown Wilson (B.W.) Brooks, whose farm sat on the Cabarrus-Mecklenburg county line. His family raised row crops, corn, and beans, along with livestock. The farm also had a cotton gin and a corn mill, while running a country store of their own, Allen and Brooks.

Brooks Mill Farm was eventually sold 12 years ago as Clint and others moved into the western part of Stanly.

“We always grew produce. When we moved, we started growing it a little more,” Clint said.

Having a degree in biology from Appalachian State, Clint got interested in honeybees first in terms of helping to pollinate crops.

“I got a couple of colonies and I kind of fell in love with it. It took off,” Clint said about raising bees.

Some of his products started to be sold around Stanly, including at the former Fresh House restaurant in Locust, along with its Old School Mills.

The interest in bees, Clint said, eventually grew to having breeder queen bees and raising them, which was five years ago.

With the growth in sales, the Brookses decided they needed a storefront, but not just for their own products.

“We started with just our products, but we saw that we could not do it all. When we said we wanted a storefront, we wanted to feature local people, local businesses,” Clint said.

The couple first got access to the Midland building back in February, but preparing the store to be open to the public “took a lot of late nights and long weekends,” Kasey said.

“We saw from the origination of the building we wanted to keep the history of this building,” she added, noting it was Madison Biggers’ old store nearly 100 years ago.

Now nearly a century later, the Brooks Mill honey products will be sold in a store which used to feature products all that time ago from what was then the only beehives in the area.

“‘We’re hopefully taking it back to a close origination of what the building was. That started the theme of what we wanted to carry though, the old-time history,” Kasey said.

Children who have never seen soda in a bottle can enjoy a cold, glass bottle taken from a 1950s Coca-Cola cooler.

The idea of the store, Kasey said, was for people to feel at home as soon as they walk through the door.

“We wanted to have the old-timey conversations…we wanted the younger generations to be able to experience that,” Kasey said. “We wanted kids to go back in time and crack the top off a bottle, get a cheese cracker with it.”

Faith is important to the Brooks in conjunction with family, Kasey said.

“We wanted (the store) to be a family fun atmosphere but also be able to step back in time, slow down and appreciate what God has given us, and that’s family,” Kasey said. “God has carried us a very long way. We know without Him, this is not possible.”

The Brooks’ idea for the store, along with the business side, was to be an outreach for God.

“We know that there are people in the community that desperately need to know Him. We know there are people who will never set foot in a church facility. If we can be that light to them, that’s what we’re here for, to carry his mission,” Kasey said.

The Brookses wanted to thank friends and family for helping them along the way of opening the store.

“We want them to be a part of us. There’s still a lot of people that don’t know this area,” Kasey said.

Kasey said many of the people who have visited the store did not know about the many local products available.

The store and farm’s slogan is “Quality is Our Directive,” not just as an example of faith but the idea of creating an experience for the whole family.

On their opening weekend, Clint said many families came by, purchased products and then enjoyed them on the picnic tables outside. It’s the idea of families taking the time to slow down and enjoy simple pleasures, he added.

“This is our focus. We want to highlight the local community to give them something that they want,” Clint said.

While they may not be able to provide everything to everyone, the Brooks Mill Farm can bring the best of Stanly to the world.

Kasey summed up the idea of the store.