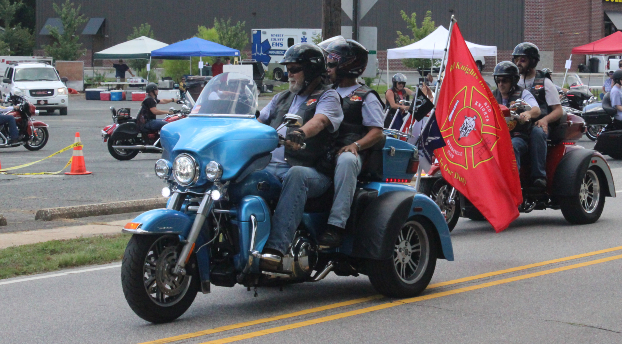 David and Misty Barbour of the Red Knights MC Chapter 24 lead the ride from Badin Saturday. (Photo by Charles Curcio/staff)

The large parking lot next to the Badin VFD Building Saturday was nearly filled to capacity with vehicles to honor the bravery of two local firefighters.

A rally of motorcycles, show cars and fire trucks made its way around the area on a 90-minute ride to benefit two Albemarle firefighters injured on the job.

The firefighters were injured responding to a fire in the kilns at the Fiberon plant in New London. One was able to attend the event.

A total of 145 motorcycles, 55 cars, trucks and jeeps, along with 11 firefighting apparatuses from nine districts, participated in the rally. People came from as far as Maryland and Alabama for the event.

According to KimJay Sites of the Red Knights NC Chapter 24, a firefighter motorcycle club, $12,030 was raised from the event.

The ride was also assisted by the Badin Police Department and the Stanly County Sheriff’s Office as well as deputies from both Davidson and Montgomery counties and the Albemarle Police Department.

Sites said the turnout was amazing. He said he did not expect half as many people to participate.

“(The firefighting community) has always been a brotherhood,” Sites said. “I’ve been in the fire service since I was 15…it’s always been a family. No matter if you come and go, it’s still a family.”

Sites said meeting new people in the fire community instantly makes them a brother or sister to you.

“They’re always here to support you no matter where they are at,” Sites said.

Whenever someone is hurt on the job, it makes an impact, but even more so when it is someone local, he said.