BJ DRYE COLUMN: It happened at the auction 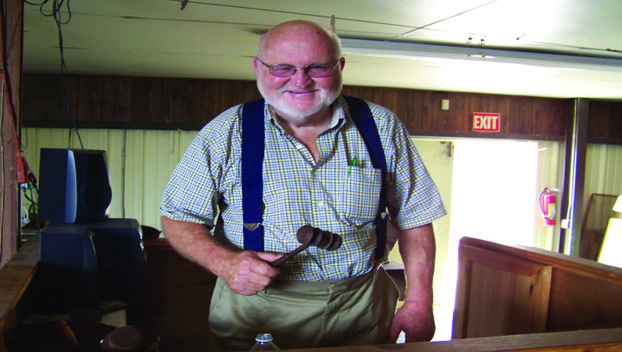 Ted Hinson was a professional auctioneer for nearly 60 years. He posed for this photo in 2012 to help promote a story on SCC's Carolina Auction Academy.

Auctions will never be the same.

Sure, Ted Hinson had already transitioned from full-time auctioneering long ago, but with him gone, it’s not going to be the same.

Now, I’m not knocking the family or their business. I know they’ll do a great job, as they always have.

I’m talking about what Ted brought to his auctions. That is what will be missing. Him.

His auctions were the first ones I attended. It’s where I learned that you can get caught up in the excitement of bidding and end up overpaying for something you really just didn’t need in the first place.

I did buy more than a few lunchboxes and records at his auctions. Some of my best memories of buying and time spent with family come from his auctions and antique festival.

Over the years, my dad and I got where we couldn’t walk through the rocky terrain at Big Lick Festival Park.

But for the few years we did attend, we had some good times with my uncles Bill and Richard and great-uncle Herman and cousin Steve. We each had an interest in something different, but it was also just as much about looking and the thrill of the chase rather than actually finding anything to bring home.

It’s also where I met Jerry, the coin guy; where I met Abu, the camel who liked to drink Mountain Dew; where I dreamed of doing what Ted was doing.

But I didn’t have the build to lug around big items, even if my family does say I have the big mouth for it.

So I stuck to helping promote the grand events Ted would have.

I also got to watch him on a closer scale as he worked auctions for both of my grandparents’ estates.

It is tough to see items your grandparents worked hard for all those years go in seconds after a “going once, going twice, SOLD!”

I would like to find out if the buyer of my mom’s 1966 Mustang still has it and has cared for it as much as she did. Or if the buyers of Grandpa’s buggies were able to get them into better shape.

I guess I have Ted to partially thank for my interest in antiques and love for shows such as “American Pickers” and “Pawn Stars.”

It’s as much about the history of an item as it is whether the item has any value or looks good.

Speaking of history, one of my biggest regrets is that I didn’t get to finish the book Ted and I were working on about his life. I have spoken with his son Jeff and it is on our to-do list, hopefully in the next year.

One thing is for sure. We lost a precious commodity on Friday. He is probably off making a deal somewhere.

As for me, once all this COVID pandemic clears out, I will be going to more auctions with that man with the grin on my mind — in memory of Ted.