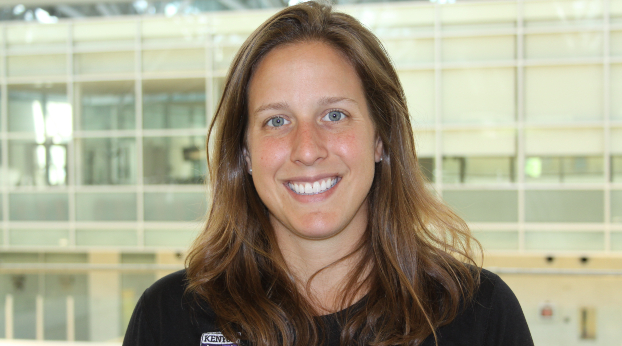 Pfeiffer University announced Monday the hiring of Katie Cobb as the new head coach of the Falcons’ women’s soccer program.

Cobb comes to The Village after serving as assistant coach at Kenyon College in Gambier, Ohio over the past three seasons. While at Kenyon, Cobb helped the Ladies capture the 2017 North Coast Athletic Conference regular season championship, finishing with a 7-0-1 league mark.

Prior to her stint at Kenyon, Cobb spent the previous two seasons at Clarkson University in Potsdam, New York, where the Golden Knights posted a combined record of 13-16-5 during her time.

In 2014, Cobb spent the season at Middlebury College in Middlebury, Vermont. There, she helped lead the Panthers to a 10-7 overall record and had a pair of players earn NSCAA All-Region honors.

Cobb has also spent time coaching at the club level with the Seacoast United Soccer Club, Global Premier Soccer Maine and several other College ID Camps in New England and across the country.

“I am absolutely thrilled to lead the Pfeiffer University women’s soccer program and cannot wait to get started,” said Cobb.

“I would like to thank Danielle Lafferty and the entire search committee for granting me the opportunity to lead these young women on and off the field and continue to create a rich soccer tradition at Pfeiffer.”

Cobb concluded, “I would also like to thank Kelly Bryan and everyone at Kenyon who created the space for me to grow as a leader and helped prepare me for this new role.”

In her playing days, Cobb excelled as a goalkeeper for the University of Southern Maine, logging more than 2,900 minutes in goal while making 238 career saves and posting a career save percentage of .785. In 2013, she was a second-team Little East Conference selection.

She graduated in 2014 from Southern Maine with a degree in English Literature.

“She has had tremendous mentors throughout her career and has both competed and coached at the highest level of Division III women’s soccer in the country. We are fortunate to have Katie join our staff and bring her expertise to our program. We look forward to the many contributions Katie will make to both the University as a whole and to the women’s soccer program.”

I’m so happy for Katie and her opportunity to lead the Pfeiffer University women’s soccer program. She is ready for this challenge and will bring energy, passion, a love for soccer, and most importantly, a love for the student-athletes in the program,” said Kelly Bryan, head women’s soccer coach at Kenyon.

“She will undoubtedly take pride in being part of the athletic department and University and will be a fantastic leader along the way. Although I am very sad to see her leave our program at Kenyon, but I am so grateful for her contributions and commitment during her tenure over the past three years.”

Jill McCartney, Director of Athletics at Kenyon, said “we are all happy for Katie on her move into the next stage of her soccer coaching career and her first as a collegiate head coach. She has proven to be a knowledgeable coach and passionate proponent for the value of college athletics in the growth and development of young people. Katie is also a team player in the department, willing to serve wherever she is needed and always performs her duties with the same integrity and care for another team as she would for her own. We are going to miss Katie, but we wish her great success at Pfeiffer University.”