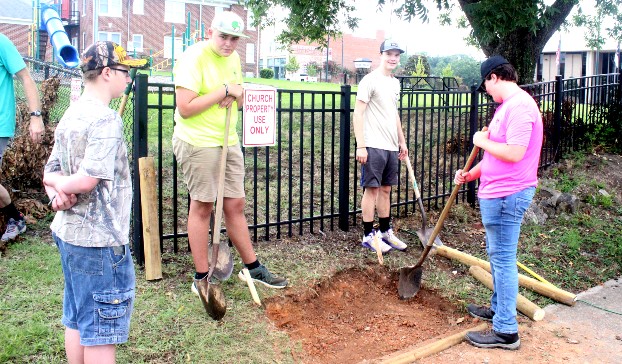 The American flag, long a symbol of the United States, has very specific ways to be disposed of when falling apart under the U.S. Flag Code.

Stanly citizens will now have a place to deposit old American flags for a local Boy Scout Troop to dispose of properly.

The new box on South First Street, behind First Lutheran Church of Albemarle, was constructed as an Eagle Scout project for Ray Ritter of Troop 82.

People may bring their flags to deposit in the locked box, which Ray and his father, Jason, took about several hours to construct.

Ray said the idea came to him one night while researching ideas for projects. He found Charlotte was the nearest location for a flag disposal box.

He added people with flags who do not want to go through the ceremony of its disposal can leave them in the box for the troop, who will have the honor ceremony and then dispose of the flags properly.

Ritter explained the honor ceremony involves cutting the flag into strips and burning it according to the code.

Completing his project and the Eagle Scout requirements means Ray will be able to join two cousins who have reached the same high honor in Scouting, as well as his grandfather.

“It’s a big thing in my family,” he said. “It’s going to be a huge accomplishment. I didn’t think seven year ago I’d make it this far. I’ve had my trials; I’ve done a lot.”